Flip steals Yuma's "Utopia", causing Astral to vanish. Flip reveals that he had wanted the great power of the Numbers. Yuma then tries to Summon "Leviathan Dragon" to fight back, but Flip's Trap Card takes even that away. When Yuma is pushed into a corner with his field, an unexpected monster will become the Trump Card of the Duel.

Flip has just Summoned "Utopia" from Yuma's Extra Deck using Ultra C then a shock of "Utopia" causes Flip to fall down, And a dark aura appears around him "Utopia" says "Let the Number take hold" as the Number 39 appears on his right hand. Astral falls to his knees and lights appear around him circling him and now Astral is in a cocoon, Yuma realizes that in a Number Duel the winner gets to absorb the losers Number, And if that happens Astral will disappear.

Yuma decides the only way to win is to take down "Utopia", But for that he needs a Number monster. Luckily he has two Number 17: Leviathan Dragon and "Number 34: Terror-Byte. He has only the Level 4 Gagaga Magician and the Level 2 "Flelf" he can't do anything at the moment so reluctantly Yuma ends his turn. Flip begins his and uses "Utopia" to attack "Flelf" bringing Yuma's LP down to 1900 and he sets a monster and ends his turn.

Yuma begins his turn by Summoning the Level 3 "Rai Rider" and then using "Gagaga Magician"'s effect to change its Level to 3. He then overlays "Gagaga Magician" and "Rai Rider" to Xyz Summon "Number 17: Leviathan Dragon" Flip activates his Trap Card "Traitor Fog", changing control of "Leviathan Dragon" to his side of the field. This causes Astral to disappear fully into the cocoon and the Number 17 to appear on Flip's left hand. Elsewhere, Bronk and Tori are checking out the photos on a laptop that show Yuma playing pranks on them and crushing flowers. Tori zooms into the photo and realizes that it was a cut and paste. They both decide they need to find Spencer, who was in one of the photos. Tori decides to phone him. He answers but doesn't tell them where her is and ends the call. 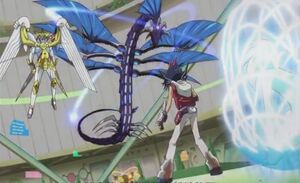 But the chimes Tori heard gave away his location. Back at the duel Yuma asks Flip why he's so mean, Flip replies saying "I'm not mean, the world is, and I learned it the hard way, Yuma! See, I was always like this. I was a sap like you." Flip then remembers how he became like this, Back when he was just entering the Duel Monsters world. As a small child older children took advantage of his ignorance towards dueling to cheat him out of his cards through Ante Duels, saying they would accelerate his improvement when the stakes were higher. He eventually found out, running home in tears and vowing revenge. Later on he dueled them and took all of his cards back and respect from them. Flip says that dueling is all about winning which Yuma says that it's not it's about having fun and doing the best you can do. Bronk and Tori are still looking for Spencer and they can't find him. And realize the only place neither of them has checked is the old gym, Tori and Bronk run in and shout "Spencer", Spencer then loses concentration and hits the dominoes with the one he was placing causing all of them to fall. He says that Flip said he would give him an Xyz Monster if he stayed in there all day setting the Dominoes up for him.

Tori and Bronk then realize that Flip sent out the photos and asked Spencer to hide out in here so he couldn't tell anyone the picture were fake. Then understand why Flip did it, He wanted a Duel with Yuma. Back at the duel, Yuma thinks that he needs to Summon "Terror-Byte" and looks at "Release Lease" in his hand and sacrificing Baby Tiragon to get a Level 3 Monster in his hand. Yuma is about to, But Astral says "Protect Tiragon". Yuma switches Baby Tiragon to Defense Position and sets a card. Flip begins his turn and comments that it will be the last. Elsewhere Bronk and Tori are still searching for Yuma then they decide to look in the mall.

Back at the duel, Flip uses "Leviathan Dragon's" abilty raising its ATK to 2500 the same as "Utopia". He flip Summons "Flipangutan" and uses it's effect to turn "Baby Tiragon" into attack mode and uses "Leviathan Dragon" to attack it. Luckily, Yuma has a plan and uses the trap card "Half Unbreak" to protect his monster from being destroyed this turn, But still takes damage, Yuma's LP are at 1100 and Flip sends "Utopia" to attack "Baby Tiragon" Yuma's monster is still safe but his LP are now at 300. 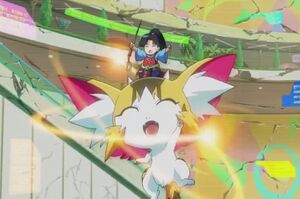 Flip then uses the spell "Book of Flip" to flip "Flipangutan" face-down which means next turn he'll use it's effect and wipe out Yuma's LP. Bronk and Tori arrive and see the differences between Yuma and Flip's LP 300 and 2500. He then draws "Stinging Swordsman" not the defense he was hoping for, Flip notices that it wasn't the card Yuma needed and says that it's hopeless and he's got a weak Xyz Monster on his field, Yuma disagrees saying "Points don't make the monster" and remembers what Astral said "Protect Tiragon" and he Summons "Stinging Swordsman" and Flip then says that monster won't even hurt me.Yuma replies that it will because Baby Tiragon is not so useless and 'cause "I'm feeling the flow!" Yuma activates "Tiragon"'s effect by removing one Overlay Unit he can let the Level 1 "Stinging Swordsman" attack Flip directly and then he uses it's effect to return all of Flip's Spell and Trap cards to his hand, Flip drops to the ground as the Numbers influence leaves him and "Utopia" and "Leviathan Dragon" go back to Yuma's field and Astral to reappear. Astral stands up and calls for "Leviathan Dragon" to attack Flip's face-down monster, Which makes Yuma mad. But Yuma says that it was a good move and uses "Leviathan Dragon" to attack Flipangutan who was face-down, And uses "Utopia" to attack directly. 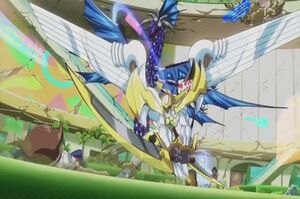 Flip is sent flying backwards, as his LP drop to 0 and Yuma is the winner, Bronk and Tori cheer and congratulate Yuma, Astral also says "Nicely done". Yuma walks over to Flip and goes to give him the "Baby Tiragon" card and says he's earned it, like his respect by not cheating. Flip thinks that this is a trick and Yuma is going to make him look a fool, Yuma says there's no way he could make Flip look like a fool not with those specs his wearing there pretty hip. Flip starts crying and says that's the nicest thing anyone's ever said to me, he stops crying and says he'll start over and tells Yuma he can keep the card. Which Yuma is happy about cause he did form a bond with it, And the card can be a symbol of their friendship, Which makes Astral say "Observation No.9 Glasses are hip". Elsewhere, Spencer is still putting up Dominoes and has one left. He goes to put it down, but accidentally hits one with his shoe causing them all to fall.

3/2000/0, ORU: 2) in Attack Position. As Yuma Special Summoned a monster to his side of the field, Flip activates his face-down "Traitor Fog" to gain control of "Leviathan Dragon". Yuma's hand is shown to contain "Half Unbreak", "Release Lease", and "Ganbara Knight". He switches "Baby Tiragon" to Defense Position and Sets a card.

1/300/600) in Attack Position. Yuma then activates the effect of "Baby Tiragon" to detach an Overlay Unit ("Baby Tiragon": 3 → 2 ORU) and target "Stinging Swordsman" in order to let it attack directly this turn. "Stinging Swordsman" attacks directly (Flip: 2500 → 2200 LP). As it successfully attacked directly, Yuma activates the effect of "Stinging Swordsman" to return all face-up cards in Flip's Spell & Trap Card Zone to his hand. Since "Ultra C" and "Traitor Fog" have left the field, their second-to-last effects return "Utopia" and "Leviathan Dragon" to Yuma's side of the field. Yuma's hand contains "Overconfidence", "Ganbara Knight", "Release Lease", and "Double or Nothing!". "Leviathan Dragon" attacks and destroys Flip's face-down "Flipangutan". "Utopia" then attacks directly (Flip: 2200 → 0 LP).