"Training Days, Part 1", known as "A Fight to the Death, The Duel Lodge - Resurrection of Legendary Monsters!!" in the Japanese version, is the fifteenth episode of the Yu-Gi-Oh! ZEXAL anime. It first aired in Japan on July 18, 2011 and in the United States on March 17, 2012.

Having clearly seen Kite's power, and how utterly hopeless they are, Yuma and Astral are keenly aware that they cannot easily recover. At that time, Yuma talks to his grandmother. She mentions a mysterious old man named Roku at a Duel Sanctuary who owns a wooden statue of the Legendary Monster "Dark Magician", who is waiting for Yuma and his crew. Yuma makes a strong wish based on his desire to train and get better!

It is at least a day after the duel Yuma and Astral had with Kite, and both are thinking about how close each of them were to losing their souls and "Number" cards. Yuma tries to cheer Astral up by telling him that Kite will come back for them and they need to be ready for him when Bronk and Tori come in. They show him an advertisement of the World Duel Carnival and how many duelists will be coming from around the world for the tournament. Yuma speculates that Kite will be there and looks worried. Bronk and Tori start to notice this and don't know what's wrong. Haru comes in and ask Yuma to take a delivery of food to a friend who lives outside of town. Yuma complains that it is the weekend and doesn't want to deliver it, but after she shows her temper, Yuma is forced to agree

A few hours later, Yuma is trying to get the food up a huge set of stairs, and complains how tired he is as the stairs seem to go on forever for him. Bronk tries to reassure him that if stops now he would have to take all the food back down, and with that new determination, Yuma becomes the first person to make it up the hill. At the top of the hill there is a dojo. Yuma walks inside and finds there is no one around. From above a shadow is seen and jumps on the bag of food. Outside, Bronk and Tori here Yuma yell and run in to see what is the problem. Yuma claims that there is a monkey on his back, but they see that it is an old man eating the food. Astral can be seen above floating not taking any notice to the situation.

After the old man eats all the food, he reveals that he is Roku, But he says to call him Master Roku, which gets them all thinking why. It then changes back to Yuma's house when Kari learns that Haru sent Yuma to the Duel Sanctuary, which she thought was a bad idea as it was apparent against whatever their parents had told them. Haru tells her that they both know that Yuma's love for duelling is unbreakable and that it was better that they prepare him for what lies ahead, With Kari not getting it at all.

Back at the dojo, Yuma, Bronk and Tori are surprised that they are not able to get home. Roku explains that they missed the last bus and also while at the same time they needed to clean up the room due to the note Haru gave Roku explaining they would do every need for him. They started doing the task until when Yuma sees a door and wonders where it leads. When he opens the door, he finds a room full of Duel Monster statues of legendary monsters. Bronk and Tori soon follow him and are amazed of all the statues, and even Astral starts to take interest. Roku appears and explains that the statues were built in the name of all people who mastered the art of dueling under his wing. Tori is amazed by statues stating that they look like they are about to moved. Roku then explains that they do move in a duel and challenges Yuma to show them. 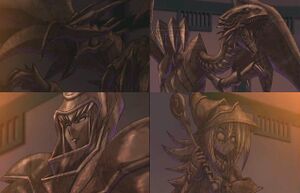 To start the duel, they each have two monsters each brought out for each of them. Roku has "Blue-Eyes Statue Dragon" and "Red-Eyes Statue Dragon" while Yuma has "Statue Dark Magician" and "Statue Dark Magician Girl", with every monster having 0 ATK and being unable to attack. Yuma then looks confused thinking that Roku was just kidding that the statue were able to move, with Roku saying that their ability to move is for Yuma to make. Astral understands this and tells Yuma he has the ability to unlock their potential in his deck. Yuma listens and draws a card. He activates the Field Spell Card "Statue World", which restores the ATK of all "Statue" monsters and allows them to attack. Bronk says that this was the greatest thing he saw, with Tori shaking her head in embarassement. Yuma then attacks "Red Eyes Statue Dragon" with "Statue Dark Magician". Roku compliments Yuma, but tells him that Yuma may have made a monster move but can you truly "move" a monster. Yuma asks him what he meant as he had his monster destroy Roku's monster. Roku tells that Yuma needs a new perspective, and somehow he needs to become Dark Magician himself. Astral comments that this was an interesting scenario. 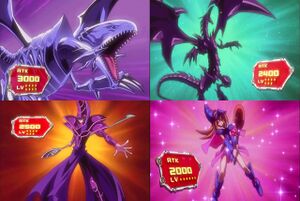 The "Statue" monsters are restored.

Roku then begins his turn, by drawing his card. He then plays the spell card "Polymerization" which fuses his three "Blue-Eyes" into the "Blue-Eyes Ultimate Statue Dragon". He uses this to destroy "Statue Dark Magician Girl". Roku then uses "De-Fusion", which returns his "Ultimate Dragon" to his Extra Deck and Special Summons his three "Blue-Eyes Statue Dragons" again. Realizing what is going to happen, Yuma starts to get scared, begging Roku not to attack. Roku explains that the fear he is experiencing is natural when staring into the eyes of a powerful foe, and this fear is something that even Duel Monsters experience when they are brought out to duel. He then proceeds with attacking Yuma directly, making Roku the winner. 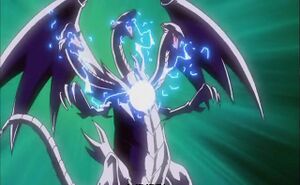 After the duel, Roku remarks that despite pushing him too far, Yuma had felt the fear all monsters feel whenever they are summoned to battle, and when Yuma makes that fear his own and learns how to tame it, he will truly be able to "move a monster".

The next morning Yuma is seen cleaning the statues. Bronk reminds Yuma that they were going to catch a movie today. Yuma tells if they wanted to go, they could go, but he was going to stay behind to clean the statues. Tori, liking the kind of person Yuma was turning into, decided to stay behind to make breakfast for Yuma. Bronk becomes frustrated that both of his friends bailed on him decided to stay. Roku comes in and appreciates what Yuma is doing and he starts to leave but halts when Yuma remarks towards one of the statues being broken and Roku leaves with a frown.

Roku then goes outside the Duel Sanctuary thinking about the kind person Yuma is and compares Yuma as the opposite of "him". A flashback is seen with a man who had apparently did something bad at the dojo in the past. Back in the present Roku sees a man walking up the path and realizes that it is "him". The man guesses that Roku wasn't expecting to see him here, Roku says that he is right, as he said he wasn't supposed to come back here. 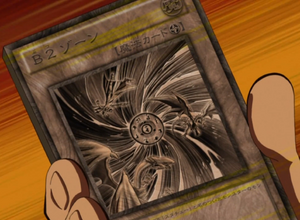 Yuma draws "Statue Zone" and subsequently activates it, which negates the effects of all "Statue" monsters on the field and subsequently returns their ATK and DEF to their original values. "Statue Dark Magician" attacks and destroys "Red-Eyes Statue Dragon" (Roku: 4000 → 3900 LP). 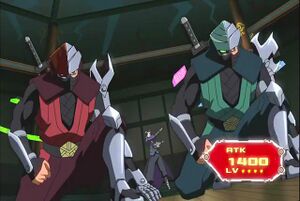 4/1700/1000) in Attack Position. He then activates "Armor Ninjitsu Art of Teleportation" to target "Flame Armor Ninja" (as it's a "Ninja" monster) and Special Summon "Air Armor Ninja" (