From Yugipedia
Jump to: navigation, search
For other versions of this character, see Haru Tsukumo (disambiguation).

Haru Tsukumo ( , Tsukumo Haru) is a character in Yu-Gi-Oh! ZEXAL. She is the grandmother of Yuma Tsukumo and Kari Tsukumo and mother of Kazuma Tsukumo.[4]

Haru is a sweet, friendly and loving grandmother. Despite Kari's rule to prevent Yuma from dueling, Haru knows how much it means to him so she allows him to do so. She does have a tough side though as in the first episode as she was able to easily catch Yuma with his stick and say "either you give grandma a kiss goodbye or you get....A Grand Slubbaring".

Her granddaughter Kari prohibits Yuma from Dueling, but apparently she allows Yuma to Duel without Kari finding out. Apparently, she easily intimidates Yuma so that he obeys her. However, when she intimidates him, it is always for his well being, like when she did it to make him have breakfast (a kiss in the dub version) or go to the Duel Sanctuary. She often makes rice balls for Yuma, which he often eats when in trouble during his duels, he calls them his "Duel meals". ("Duel fuel" in the dub.)

Haru has her own Duel Gazer but wears it differently than most Duel Gazer wearers. Instead of placing it above her ear, she places it on top of her nose like glasses; possibly to reflect her elderly age. She also appears to have some memory issues shown when she was with her friend Meredith and both constantly forgot what they were talking about.

According to her, Dr. Faker was the last person guided by Kazuma, although it's unknown whether she and Faker met in person or not.[5]

Upon noticing Yuma's lack of his normal self, she had him and Tori go to the Duel Sanctuary.[6] She later appears again, when Lillybot return from buying groceries, she checks the groceries to make sure it is correct and then she thanks Lilly.[7] One night at dinner, Yuma was eating his dinner at a fast pace, which caused Haru to asks why he's acting differently. After dinner was over, while Haru and Kari were washing the dishes, the latter asked her grandmother why Yuma was acting differently and what he was planning. Haru replied that Yuma was like Kazuma because he acted that way before leaving on a big adventure. This caused Kari to get upset and leave to stop Yuma, but Haru stopped her. She told her that all they can do is watch over Yuma. The next day, when Yuma tried to leave his home, Haru calls out to him. Surprised, Yuma turned around and found his family waiting for him at the door. Lillybot tossed Yuma some Duel lunch and Kari told Yuma to come back for dinner before voicing her support for her brother.[8] 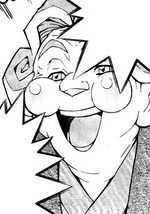 Haru in the manga.

In the manga, Haru is Yuma and Akari's grandmother like in the anime. 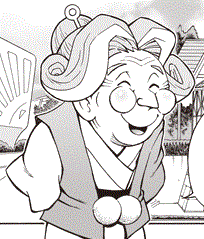 In Yu-Gi-Oh! D Team ZEXAL, Haru is Yuma's grandmother like in the canon media.

When the other members of Team ZEXAL go to Yuma's house after his loss to Shark, Haru welcomes them. Kotori asks her how Yuma is doing, and Haru tells her that he has been in bed since he came back home. Kotori then thanks her as she and the gang head to Yuma's attic.[9]