From Yugipedia
Jump to: navigation, search
For other versions of this character, see Kaze (disambiguation).

Kaze, known as Yamikawa in the Japanese version, is a character in Yu-Gi-Oh! ZEXAL. He is a reformed student of Roku's Duel Sanctuary, as well as one of the Number holders. 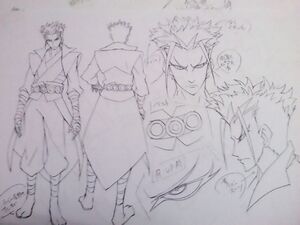 "Yamikawa" means "river of darkness", and he was said to possess some darkness in his Duels, and had a "Number" card, which amplify the darkness in their owner's hearts. His dub name, "Kaze", means wind in Japanese, a possible reference to his ace monster, "Blade Armor Ninja", which is WIND Attribute.

Kaze was a student at Roku's Duel Sanctuary, but after Dueling him and losing his faith, he grabbed a sword and slashed a statue of "Blade Armor Ninja", cutting it in half. Afterwards, he left the Duel Sanctuary and hadn't been seen since.[1]

After Yuma Tsukumo and his friends went to the Duel Sanctuary to help Roku out, Kaze showed up again and challenged his former master to a Duel, which he easily won. He then ran inside and went to take the Legendary Deck, but was stopped by Yuma, who challenged him to a Duel.[2]

As the Duel progressed, both continued to overthrow each others' strategies and it was revealed that all of Kaze's hatred caused him to become possessed by a "Number" card, "Number 12: Crimson Shadow Armor Ninja". Kaze ultimately lost when Yuma Summoned "Number 39: Utopia" and defeated his "Number". He then went to slash the statue again, but was stopped by Yuma who convinced him that it was wrong, to which he apologized and began to study at the Duel Sanctuary again.[1] 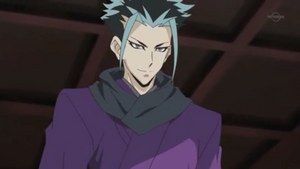 When Haru Tsukumo sent Yuma back to the Duel Sanctuary, Kaze answered the door and explained to him that Roku was away right now. In the Statue room, Kaze talked to Yuma about his frustrations and empathized with him by mentioning his own frustrations in the past. He told Yuma that he had been studying with Roku, and gave him two cards that Roku had left there for Yuma - "Overlay Chain" and "Overlay Barrage".[3] 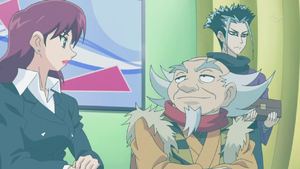 Kaze and Roku on TV.

When Kiraku Souhachi's statue was discovered, Kaze appeared on TV with Roku, presenting the artifacts that were also found.[4]

Girag vs. Kaze and Roku.

After the Barians began to invade Earth, Kaze and Roku became aware of the crisis in Heartland and went to aid Yuma. When Yuma was rendered unable to Duel, they appeared and attacked the Emperors with smoke bombs, allowing Yuma to escape. When Girag attempted to give chase, they blocked his path and challenged him to a Duel. Kaze commented that Girag was no match against him and Roku combined, but Girag commenced a Chaos Draw alongside the other Emperors as he looked on in shock.[5] This let him use "Rank-Up-Magic - The Seventh One" to bring out "Number C106: Giant Red Hand". Kaze claimed that even if their bodies perished, the "blades of their hearts" would not be shattered. Girag defeated them both, with Kaze saying that he regretted nothing as their souls departed for the Barian World.[6]

After Nash was defeated by Yuma, Kaze was revived as the fusion of Earth and the Barian World was stopped and the Barian Pipe released all the souls it contained. Kaze reappeared at the same spot where he and Roku were defeated by Girag and smiled towards the sky, knowing that Yuma saved them.[7]

Kaze uses an "Armor Ninja" Deck, capable of quick Xyz Summoning. His ace monster is "Blade Armor Ninja". While possessed, he used "Number 12: Crimson Shadow Armor Ninja" after "Blade" was destroyed, which was later absorbed by Astral. His cards are supported by a wide array of "Ninjitsu Art" cards.