From Yugipedia
Jump to: navigation, search
This article is about the species. For other uses, see Barian (disambiguation).

Few members of the Barian species; from left to right; Dumon, Vector, and Mizar.

A Barian, or Varian (バリアン Barian),[1] is a species of beings originating from Barian World, a high-energy world in the Yu-Gi-Oh! ZEXAL anime. Most of them were once human, but they all have been reincarnated as Barians when they died. The majority of those lived in the United Lands of the Poseidon Ocean before their deaths, hence why Nash was reborn as their leader. An elite group of Barians are the Seven Barian Emperors. The Fearsome Four of the Dark Dueling World are also an enforcer group of Barians. Since Barian World was originally part of Astral World before the power of Chaos was banished from it, a small portion of the Barians were originally denizens from Astral World. The only known Barian to fit in this category is Don Thousand.

While in Barian World, Barians appear humanoid, though they tend to conceal themselves in cloaks.[2]

One Barian, Vector, has also exhibited the ability to take on an energy form while on Earth, which resembles a winged, red version of Astral.[3] 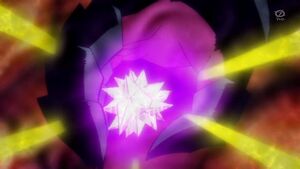 The Seven Barian Emperors, formerly human, resemble humanoid beings with unnatural skin color, such as purple or red. Furthermore, all of them have what seem to be crystals and/or armored-like plates on their bodies, such as Mizar's face resembling a mask, Girag's face resembling a helmet, and Dumon having gems on his body. Also unlike humans, they seem to lack certain organs such as mouth or nose, or perhaps those organs are otherwise not seen (the only exception being Don Thousand, due to being from Astral World); despite this, their senses appear unhampered, as is their ability to speak. In the English dub, the Barians in their Barian forms have an echo effect in their voices when they speak. They also have crystals for hearts and as seen with Mizar, they seemingly have the ability to survive in space. [4] They also cannot maintain their Barian forms on Earth without the use of a Sphere Field, with the exception of Number ruins.

In contrast, other Barians, such as those belonging to the Fearsome Four of the Dark Dueling World, take on less humanoid forms depending on the different species based off of them, like a cicada, a jellyfish, a mosquito, and even a fly. They can even survive in low-energy enviornments such as Earth in their true forms.

The Seven Barian Emperors of Barian World are loosely named after one of the stars of the Big Dipper in the Japanese version: Durbe after Dubhe, Alito after Alioth, Mizar after Mizar, Girag after Merak, Vector after Phecda, Nasch after Benetnasch and Merag after Megrez. 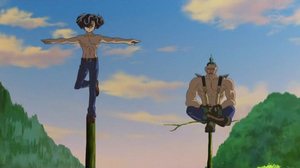 While on Earth, Barians are forced to take on a human form, not knowing that this form was the one they had from the time they were humans, although Dumon apparently only needs to do this if his Baria Crystal is damaged. The only major resemblance between both their Barian and human form is their hair, which only changes color.[5] As energy beings, they have remarkable tolerance to pain, even in human form; Girag was able to take a punch in the face from Fender without so much as a flinch, though they are not immune to pain and injury entirely. Dumon, Erazor, Chironex, Scritch, and Mr. Heartland however, can retain their true Barian forms on Earth, though Dumon has only done so inside of or very close to "Number" ruins and the Fearsome Four of the Dark Dueling World all did so within Barian Fields. [6] With the partial merging of Earth and Barian World, the Barian Emperors can take their true forms on Earth without the presence of Number ruins or a Sphere Field.

Barians can travel from Barian World using Overlay Networks and can also utilize the ability on Earth, vanishing and teleporting on a whim.[5][7][8] Mizar showed the ability to fire energy balls for offensive purposes, though they do not cause lasting damage.[7] These abilities can also be granted to humans. Vetrix, who made a contract with the Barians, was able to produce energy balls and use the aforementioned networks to travel.[9]

"Number C105: Battlin' Boxer Comet Cestus" has winged-like parts on its body, which all have Barian energy seen in it.

Barians possess the ability to Rank-Up their Xyz Monsters by the use of "Rank-Up-Magic Barian's Force", which possesses the power of Chaos to let them Summon "Number C" and "CXyz" monsters. "CXyz" monsters originate from Barian World and are produced there as "weapons" to defeat the "Number" monsters.[2] While in human form, Barians cannot wield them, but they can use "Barian's Force" to brainwash humans into doing so for them.[5] The brainwashing effect seems to vary depending on who does the brainwashing. Girag's victims retain their personalities, but become devoted to serving Barian World, while Vector's victims are more like sleeper agents; retaining their original personalities until the brainwashing activates when they draw "Barian's Force", at which point they become ruthless and sadistic like Vector himself. Alito's brainwashing on the other hand completely robs the victim of free will and personality. Don Thousand's brainwashing has two levels; the first altering the victim's personality (and possibly their memories) to become more aggressive, while the second puts the victims completely under his control. Interestingly, the Barians themselves are not immune to being brainwashed as seen when Girag brainwashed Vector (though he could have been faking), and when Don Thousand brainwashed Girag and Alito. In addition, if a Barian were to lose a Duel to a person using a "CXyz", they would vanish from existence, just as Astral would if he lost to a "Number".[10]