Xyz Evolution, known as Xyz Change (エクシーズ・チェンジ Ekushīzu Chenji) in Japanese, is term used in the Yu-Gi-Oh! ZEXAL and Yu-Gi-Oh! ARC-V series for an Xyz Summon performed using an Xyz Monster as the sole Xyz Material.

This type of Xyz Summoning first appeared in the anime in Yu-Gi-Oh! ZEXAL - Episode 018 when it was performed by Yuma Tsukumo.

An Xyz Evolution can be performed by utilizing the Summoning procedure of an Xyz Monster or by a card effect.

Xyz Summons in which multiple Xyz Monsters are used as material (such as the regular Xyz Summon of "Number F0: Utopic Future") are not Xyz Evolution, and hence Xyz Materials are not necessarily transferred.

Some Xyz Monsters have a Summoning procedure that allows it to be Xyz Summoned by using a single Xyz Monster as material, usually with some kind of restriction on the Xyz Monster that can be used. This is typically worded as You can also Xyz Summon this card by using […] as material. (Transfer its materials to this card.)

Example A: Via a Summoning procedure[edit]

Example B: Via a card effect[edit]

Types of Xyz Evolution in the anime and manga[edit]

Chaos Xyz Evolution (Japanese: カオスエクシーズ・チェンジ Kaosu Ekushīzu Chenji) is the first type of Xyz Evolution shown in the anime, debuting in Episode 18 of Yu-Gi-Oh! ZEXAL when it was performed by Yuma Tsukumo.

The method to Summon a "Number C" or "CXyz" Monster is the same as the TCG/OCG. In addition the requirement to gain a Number C is for one to "carve a clear path" out of the chaos of confusion into the light. Later in the Barian Invasion arc, Chaos Xyz Evolution can be also achieved through a Rank-Up-Magic card (i.e. "Rank-Up-Magic Barian's Force"), the Field Spell Card "Chaos Field", or the Continuous Spell Card "Don Thousand's Throne".

Rank-Up Xyz Evolution (Japanese: ランクアップ・エクシーズ・チェンジ Rankuappu Ekushīzu Chenji, Rank-Up Xyz Change), also known as Double Rank-Up, is the evolved form of Rank-Up Xyz Summoning in Yu-Gi-Oh! ZEXAL and ARC-V anime. It was first seen in Episode 119 of Yu-Gi-Oh! ZEXAL when it was performed by Eliphas.

In chapter 42 of the Yu-Gi-Oh! ZEXAL manga, Yuma Tsukumo gained the ability to perform Rank-Up Xyz Evolution by creating "Rank-Up-Magic Shining Force" through the power of Destiny Draw. This allowed him to Rank-Up his Rank 4 "Number S39: Utopia One" into the Rank 5 "Number S39: Utopia the Lightning".

This type of Summoning also appears in Yu-Gi-Oh! ARC-V. 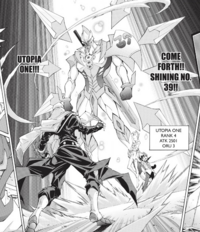 The first Shining Xyz Evolution in the Manga.

Shining Xyz Evolution (Japanese: シャイニングエクシーズ・チェンジ Shainingu Ekushīzu Chenji) is a form of Xyz Summoning in the Yu-Gi-Oh! ZEXAL manga, similar to the Chaos Xyz Evolution. It can Summon "Shining Numbers" and was first used in Rank 32 by Yuma Tsukumo, who Summoned "Number S39: Utopia Prime" by overlaying "Utopia". Shining Xyz Evolution was later performed by him during his Duel with Kaito, in which "Number S39: Utopia the Lightning" was created. Later, in the final Duel against E'Rah, thanks to the power of ZEXAL, Yuma and Astral became a "Shining Number" themselves.

In the Yu-Gi-Oh! ZEXAL manga, Astral first awakened the ability to perform a Shining Xyz Evolution when the orbs of light that appeared in front of Yuma's, Kaito's and Shark's chests connected, representing the moment of the birth of Yuma's bond with Kaito and Shark. According to Astral himself, the strengthening of their bonds managed to release some of his power, creating the "Shining Number" in Yuma's Extra Deck. At that moment, Astral shined so clearly that he became visible for an instant.

Although featured only in the manga, according to the original previews of episode 121 to 125 that were posted on TV Tokyo's website, Shining Xyz Evolution - and so very likely "Shining Numbers" as well - were supposed to be introduced in the anime, too, starting from episode 125. In fact, after Astral and Don Thousand's disappearance and the conclusion of the war with the Barians, a boy named Proto would have appeared and challenged Yuma to a Duel, using "Shining Xyz" monsters against him. However, as the plot was changed last-minute, none of this happened.

Rank-Down Xyz De-Evolution (ランクダウン・エクシーズ・チェンジ Rankudaun Ekushīzu Chenji) is a variant of Xyz Evolution in the Yu-Gi-Oh! ZEXAL anime used to Summon Xyz Monsters with a lower Rank than the Xyz Monster used as Xyz Material. It was first seen in the Duel between Eliphas and Yuma Tsukumo, when Yuma used "Rank-Down-Magic Numeron Fall" to Rank-Down "Number 39: Utopia" into "Number 39: Utopia Roots".

Reincarnation Xyz Summoning ( Tensei Ekushīzu Shōkan) is a variant of Xyz Evolution seen in the Yu-Gi-Oh! VRAINS anime used by Theodore Hamilton. It uses a copy of the same monster to Xyz Summon another one, and the Summoned copy subsequently gains additional effects. It was only seen in a single episode of Yu-Gi-Oh! VRAINS, during the Duel between Soulburner and Roboppi where Soulburner used the effect of "Salamangreat Blaze Dragon" to Reincarnation Xyz Summon another copy once the conditions for its effect were met.

These cards have a Summoning condition allowing them to be Summoned by using one or more specific Xyz Monsters as Xyz Material, in addition to their regular method of Xyz Summoning using monsters whose Levels match their Ranks; however, they do not go through any explicit Chaos or Shining Xyz Evolution. In the anime, this is not referred to as "Xyz Evolution", only being referred to as "Xyz Summon" like any other.

List of monsters which can be Summoned via Xyz Evolution[edit]