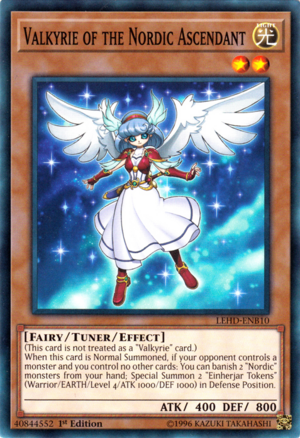 "Valkyrie of the Nordic Ascendant"

Archetype-exclusion conditions exist for the same reason as archetype conditions: whether or not a card is a member of an archetype is based on the original Japanese card name, and past localizations may have created inconsistent names. For example, 「ガエル」 Gaeru ("Frog") did not become an archetype until 2008, but 「カエルスライム」 Kaerusuraimu had already been localized and released as "Frog the Jam" in 2002. Similarly, "Fusion" did not become an archetype until 2010, but 「する」 ("Diffusing Wave") had already been localized and released as "Diffusion Wave-Motion" in 2003. As a direct result, all "Frog" support was required to manually list "Frog the Jam" as an exception (e.g. ...the number of face-up "Frog" monsters you control, except "Frog The Jam".), while a card like "Sabatiel - The Philosopher's Stone" was required to list a similar exception.

In several cases, issues like the above were resolved by renaming the earlier card, such as when "Frog the Jam" was renamed to "Slime Toad", allowing all "Frog" support to no longer list any exceptions. However, in several other cases, renaming a card is not desirable for marketing reasons, such as being a prominent anime card in the case of "Diffusion Wave-Motion". Archetype-exclusion conditions were created to resolve this situation, and thus "Diffusion Wave-Motion" now states (This card is not treated as a "Fusion" card.) as its first line, allowing "Sabatiel" (and all other "Fusion" support) to no longer need exceptions as well.

Unlike archetype conditions, archetype-exclusion conditions are never used for purposes other than localization and language differences, and thus they only occur in English and other European language cards.

The first card to receive this type of condition on the official card database was the Italian entry of "Kozmoll Dark Lady" (to indicate that it was not meant to be part of the "Darklord" archetype). The first cards to be printed with this condition were the French and German reprints of "Diffusion Wave-Motion" in Duelist Pack: Yugi included in Yugi & Kaiba Collector Box. The first English card to be printed with this condition was "Valkyrie of the Nordic Ascendant" in Legendary Hero Decks.

In English and other European languages[edit]