A Fusion Summon (Japanese OCG: Yūgō Shōkan; Japanese Rush Duel: フュージョン召喚 Fyūjon Shōkan) is the standard method for Special Summoning a Fusion Monster from the Extra Deck. It requires a card effect to combine 2 or more monsters as Fusion Material.

Most commonly, cards with effects that can Fusion Summon are Spell Cards (e.g. "Polymerization"). These effects typically involve using monsters from the player's hand or field as Fusion Materials. If not otherwise specified in the card text, monsters used as Fusion Material are sent to the Graveyard.

As Fusion Summons are always performed by card effects, the specific actions involved in Fusion Summoning are exclusively determined by the individual effects that do so, meaning that their details can vary significantly.

Treating a Special Summon as a Fusion Summon[edit]

In Yu-Gi-Oh! Rush Duel, there is only one card capable of performing a Fusion Summon: "Fusion". "Fusion" can only use face-up monsters from the controller's field as Fusion Materials.

In the Yu-Gi-Oh! anime, under Battle City Rules, which applied during the Battle City tournament, Fusion Monsters cannot attack the same turn they are Summoned. This is exemplified in episode 65, when Strings uses "Quick Attack" on "Humanoid Worm Drake" to bypass that rule in his Duel against Yami Yugi. This rule does not exist in the OCG/TCG and was removed for all subsequent series.

In Yu-Gi-Oh! ARC-V, a standardized animation is adopted for all Fusion Summons: a blue and orange rotating background based on the artwork of "Polymerization", and the Fusion Materials transforming into featureless shapes of different colors (usually contrasting ones like blue and red, yellow and violet, etc.) that swirl together to form a spinning spiral, which then sometimes turns into a bright white light. It is then followed by a close-up shot of the player, usually clasping or clapping their hands together, as if mirroring the materials becoming one.

In Yu-Gi-Oh! ARC-V, a Fusion Summon performed using Fusion Materials that have been previously Pendulum Summoned is referred to as a "Pendulum-Fusion". 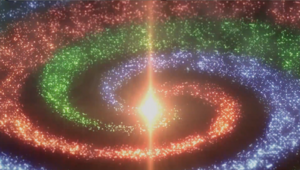 A Fusion Summon in Yu-Gi-Oh! VRAINS

In Yu-Gi-Oh! VRAINS, Fusion Summoning is changed to a different CGI effect, where the Fusion Materials transform into streams of colored particles that swirl together and then burst upwards into vortexes of colors matching the streams, which twist around each another and quickly merge into a large purple one, from where the Fusion Monster appears.

In Yu-Gi-Oh! SEVENS, the background is distorted with pink and blue ripples, visually somewhat similar to its appearance in Yu-Gi-Oh! ARC-V. The Duelist raises their Duel Disk into the air, creating a "7" shape with their arm, and "Fusion" creates a "Road" from the Duelist's Duel Disk, then it shows the listed materials fuse by overlaying one over another, creating a a large colored beam, the Fusion Monster is generated afterwards.