From Yugipedia
Jump to: navigation, search
This article is about the interaction. For the phase, see Battle Phase. 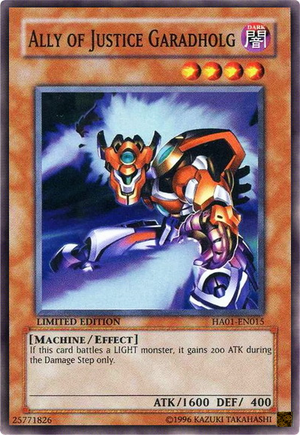 The effect of "Ally of Justice Garadholg" increases its ATK when it battles LIGHT monsters.

Battle (Japanese: Sentō) is an interaction which monsters can undergo during the Battle Phase. Many card effects are triggered when monsters battle.

A monster is considered to be battling as soon as it declares an attack (including a direct attack), if an attack is declared targeting it, or if some effect forces two monster to conduct a battle. The battle will stop when the end of the Damage Step for that battle is over and the Battle Step is entered once again, or if the attack is negated or canceled during a replay. However, the game will not recognize that a monster has battled (in the past) unless the battle it was involved in had reached damage calculation, which may be relevant for some effects that specifically mention a monster that has battled.