From Yugipedia
Jump to: navigation, search
Not to be confused with "?". 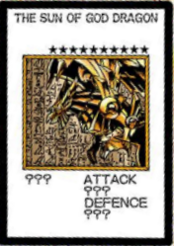 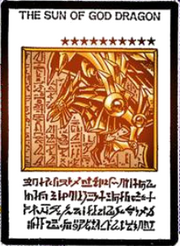 "???" used to indicate unknown information on "The Sun Dragon Ra", when its true text was hidden

??? is a placeholder value used to indicate that the actual information is unknown, such as with some anime and manga cards or cards that have not yet been released. It can be used in a number of fields, including ATK, DEF, Level, Rank, Pendulum Scale, Link Rating, Type, and Attribute.

This notation has been used officially in the Yu-Gi-Oh! manga to show that the abilities, ATK and DEF of "The Sun Dragon Ra" were unknown. When the card was held under the light of "Ra", its actual text became visible.