Contact Fusion (コンタクト Kontakuto Yūgō) is a semi-official term which means to Special Summon a Fusion Monster with its own Summoning procedure that states "You do not use "Polymerization"."[1] 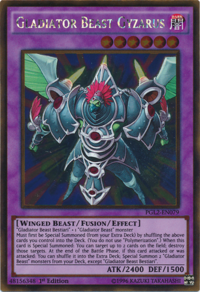 "Gladiator Beast Gyzarus", a monster that must first be Special Summoned via Contact Fusion

The first instances of this Summon were in the original Yu-Gi-Oh! manga, where specific monsters could be fused into a Fusion Monster without the use of "Polymerization". The first monster that was Summoned in this manner was "Valkyrion the Magna Warrior". Unlike Fusion by "Polymerization", monsters created by this method could attack in the same turn they were created.

This term was first widely introduced in Power of the Duelist, and was originally a term from the Yu-Gi-Oh! GX anime used to describe the Special Summoning method of the "Neos" Fusion Monsters, which are Summoned by shuffling their Fusion Material Monsters from the field into the Deck. This term was later applied to the "Gladiator Beast" Fusion Monsters by players, as those monsters Special Summon themselves via the same method.

The term has never appeared in the rulebook or any card effect text, but it does appear in the flavor text of "Elemental HERO Neos" and is often used in rulings.

This Special Summon can somewhat be considered to be a precursor to Synchro Summoning, as it only requires the proper monsters on the field and the appropriate monster in the Extra Deck, without the need of a Spell Card (as used in most Ritual Summons and Fusion Summons).