Dragon (ドラゴン Doragon) is a Type of Monster representing mythological serpentine, reptile, avian like beings that are typically fire-breathing creatures that symbolize chaos, both either evil or good, fierceness and intimidation.

In most Yu-Gi-Oh! anime and manga series, the main character's rivals usually use Dragon monsters as signature or boss monsters, and to varying degrees in their Decks. Seto Kaiba employs his signature "Blue-Eyes White Dragon" as a key boss monster while his deck in the later part of the anime also incorporates Dragons such as Spear Dragon, Different Dimension Dragon, Paladin of White Dragon and the Chaos Emperor Dragon. Chazz Princeton uses "Armed Dragon"s as a core part of his Deck in the anime, and a Dragon Deck in the manga spearheaded by "Light and Darkness Dragon". Jack Atlas's Turbo Deck is based on summoning "Red Dragon Archfiend" while his Ground Deck also plays numerous Dragons like "Strong Wind Dragon", "Vice Dragon", and "Exploder Dragonwing". Kite Tenjo uses "Galaxy-Eyes Photon Dragon", in addition to some minor Dragons. Curiously, the fifth series inverts this tradition, with the protagonist Yuya Sakaki (along with his counterparts) using Dragons, primarily "Odd-Eyes Pendulum Dragon"; his rival Declan Akaba uses no Dragons whatsoever. Varis primarily uses a "rokket" Deck, which includes Dragon monsters; all of his ace monsters are based on Dragons, though only Borreload Dragon" is Dragon-Type. Roa Kassidy in Yu-Gi-Oh! SEVENS shakes up the tradition again with Fiend monsters, while the primary Dragon Duelist is Lucidien "Luke" Kallister. Yuamu Ohdo uses Dragon monsters in Yu-Gi-Oh! GO RUSH!!.

Many multi-Type archetypes have a Dragon monster as their ace card, such as:

The "Armed Dragon" and "Horus the Black Flame Dragon" Dragon Decks are based on the "LV" Dragons. These Decks focus on leveling up their monsters quickly. To protect the high level monsters from Trap Cards, "Royal Decree", "Jinzo", "Trap Stun", "Mirage Dragon" or "King Dragun" are used. "Horus the Black Flame Dragon" has added protection from Spell Cards and is well known for the infamous "Horus Decree" lockdown. "Horus" and "Armed Dragon" cards can even be combined to make a Deck that not only locks down Spell and Trap Cards, but also controls the opponent's monsters that may get in your way.

These Deck themes focus on getting Fusion Monsters like "Five-Headed Dragon", "King Dragun", "Blue-Eyes Ultimate Dragon", and sometimes "Dragon Master Knight" or Blue-Eyes Shining Dragon to the field. Usually "Dragon's Mirror" or "Future Fusion" is used to accomplish these tasks. If you want to summon "King Dragun" quickly, "The Dark - Hex-Sealed Fusion", along with other substitute Fusion-Material monsters, can be of great help.

A popular build that utilizes a combination of Chaos monsters and "Red-Eyes Darkness Metal Dragon", focusing on summoning "Red-Eyes Darkness Metal Dragon", "Lightpulsar Dragon", and "Chaos Sorcerer"/"Black Luster Soldier - Envoy of the Beginning". Its main offensive strategy focuses on banishing its own cards in order to Special Summon its key monsters, and banishing opposing cards. Milling effects, such as "Raiden, Hand of the Lightsworn", "Lyla, Lightsworn Sorceress", "Card Trooper" and "Darkflare Dragon" are useful for sending monsters to the GY to summon "Lightpulsar Dragon", or to speed up setups for summoning "Dark Armed Dragon" and/or "Black Luster Soldier - Envoy of the Beginning". If played correctly, this deck can Special Summon its most powerful monsters within a few turns.

This deck relies heavily on Special Summoning powerful monsters with devastating effects in order to overpower and OTK the opponent. The deck can also create Level 8 Synchro monsters consistently by synergizing with "White Dragon Wyverburster", "Black Dragon Collapserpent", "Raiden, Hand of the Lightsworn" and "Plaguespreader Zombie". "Lightpulsar Dragon", "Caius the Shadow Monarch", and "Chaos Sorcerer" also open up Rank 6 plays after their effects are used.

This deck provides an easy way to play Dragons, by sending powerful dragons to the GY with effects such as "Dragon Ravine"/"Dragon Shrine" and "Number 95: Galaxy-Eyes Dark Matter Dragon", then proceeding to revive them with cards such as "Soul Charge" and "Return of the Dragon Lords". Many support cards for this deck exclusively support Normal Monsters, so it is often best to include Dragon Normal Monsters. Due to the ease with which a player can swarm the field with high-level Dragons, Xyz Monsters (Rank 7 and 8) are usable in this deck. Decoy Dragon and Red-Eyes Darkness Metal Dragon are useful as both can summon any Level 7 or higher Dragon monster from the player's GY.

Boss monsters in a Dragon Link's end boards and win conditions have varied through formats, as new cards are added and old cards are put on the Forbidden list. In the OCG, the deck initially aimed for an FTK using the effect of "Gandora-X the Dragon of Demolition". After "Gandora-X" was banned in the OCG, Dragon Link evolved into a discard combo focusing on making "Topologic Gumblar Dragon", "Chaos Dragon Levianeer", and "PSY-Framelord Omega". After "Topologic Gumblar Dragon" was banned, the deck then evolved into more conventional board-making combos, making both generic and Dragon-specific boss monsters; these include omni-negates like "Borreload Savage Dragon" and "Hot Red Dragon Archfiend Abyss", floodgates like "Dragon Buster Destruction Sword", monster negates like "Apollousa, Bow of the Goddess", and other disruptive interactions like "Hieratic Seal of the Heavenly Spheres" and "Dragonmaid Tidying". The deck's consistency and amount of extenders allows Dragon Link builds to establish boards with multiple boss monsters even through the opponent's disruptions.

Many Dragon Link builds in 2021 utilize the "Rokket" archetype as a central swarming engine, as their core support "Striker Dragon" is a generic combo-enabling Link Monster with generic Dragon materials, and most Dragon Link end boards involve related "Borrel" monsters. Because of this, these Dragon Link decks are sometimes considered "Rokket" variants. 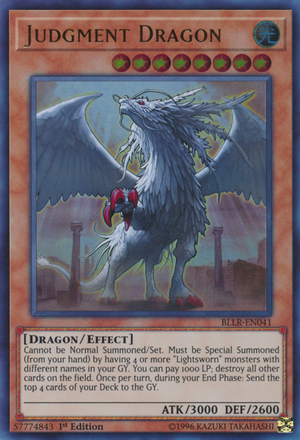