From Yugipedia
Jump to: navigation, search
For the card, see "Pendulum Scale" (card). 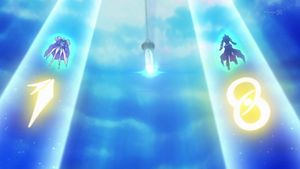 A monster's Pendulum Scale seems to have some link to its Level, with higher-Level monsters tending to have lower Scales. Additionally, since most Pendulum Monsters released to date don't have a Scale equal to their Level/Rank, this means that those monsters can be potentially Pendulum Summoned using another copy of themselves.

As with Levels, Ranks, ATK, and DEF, there appear to be some unofficial conventions that govern how high or low a monster's Pendulum Scale values may be. When Pendulum Monsters were first introduced, a Pendulum Scale could be as low as 2 or as high as 7 in normal cases, but having a Scale of 1 or a Scale of 8 or higher would require that the monster's Pendulum Effect have negative effects or conditions that restrict its use. Scale 9 and higher cards were originally required to have an even more restrictive condition that limited all of the player's Pendulum Summons to one (or a few) specific archetypes and could not be negated, preventing their Scales from ever applying to most monsters.

In May 2015 about a year after the debut of Pendulum Monsters, the restriction on Scales of 9 and 10 was slightly lifted with "Dharma-Eye Magician", which could copy any Scale 9 or 10 card without copying its negative effects. In June 2015, the convention of negative conditions on Scale 1 and Scale 8 cards was fully lifted with "Dragonpulse Magician" and "Dragonpit Magician". In October 2015, "Performapal Guitartle" would theoretically allow a Pendulum Scale to be raised to any number above 10 temporarily.

The release of Booster Pack Maximum Crisis in 2017 would print the first Scale 0 card (making Level 1 monsters Pendulum Summonable for the first time), also with no negative effects; as well as the first card with an original Scale of 13 (simultaneously the first original Scale to exceed 10 and the first original Scale to exceed 8 without an archetype lock). "Kuro-Obi Karate Spirit", releasing in 2018, is the first Scale 9 card to barely have a negative effect (it is forced to return to the hand upon being used to Pendulum Summon, potentially tripping an opponent's "Chain Energy" or "Degenerate Circuit" when it otherwise would not).