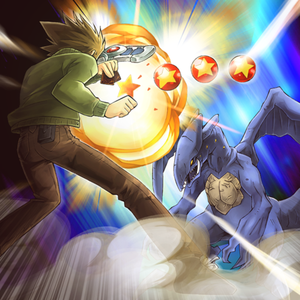 Level Star orbs in the artwork of "Star Blast"

A Level (formerly Level Star in the card text of Ritual Monster Cards and Ritual Spell Cards; Japanese: レベル or [Notes 1] Reberu) is a property of monsters.

printed in the top-right. Monsters with a printed Level of 0 instead have a Level condition that treats their original Level as a different value.

In the OCG and TCG, monsters' original Levels can range from 1 to 12, with a monster's original Level usually providing a rough indication of how powerful it is. Card effects can freely raise a monster's Level to arbitrarily large values in excess of 12, but cannot lower it below 1. In the Yu-Gi-Oh! 5D's anime and manga, as well as in the Yu-Gi-Oh! Tag Force series of video games, Dark Synchro Monsters can have negative Levels.

A monster can only have a single Level at a time.[1]

If the Level of a monster in the hand is changed (such as due to the effect of "Level Conversion Lab" or "A Legendary Ocean"), the modified Level is considered when Normal Summoning the monster.

A monster's Level is also important in Ritual, Synchro, Xyz, and Pendulum Summoning.

Due to the higher requirements involved in Summoning them, higher-Level monsters are typically not as numerous as lower-Level monsters in a player's Deck, assuming the Deck is properly balanced. While high-Level monsters are usually considered the most effective in combat, it is often the low-Level monsters that perform the most important roles, due to their ease of use and often versatile card effects such as searching other cards out of the player's Deck. In addition, many low-Level monsters possess effects that can change their ATK, which in a well-supported Deck can often give them far higher ATK than any high-Level monster. For example, "Copycat" and "Relinquished" base their ATK upon the opponent's monster, the "Meklord Emperors" can take the ATK power of the opponent's Synchro Monsters, and "King of the Skull Servants" can have an enormous ATK in the right Deck.