When an Xyz Monster is Xyz Summoned, the monsters used for the Xyz Summon are stacked underneath the Summoned Xyz Monster. The attached Xyz Materials do not occupy a Zone.

Xyz Materials underneath Xyz Monsters do not count as monsters, so detached Xyz Materials will be sent to the Graveyard even if "Dimensional Fissure" is on the field. While monsters are acting as Xyz Materials, they cannot be targeted nor apply their effects. 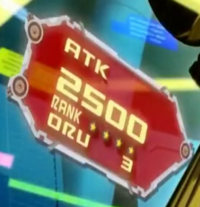 An ATK gauge from ZEXAL showing the number of Overlay Units.

An ATK gauge from VRAINS showing the number of Overlay Units.

In Yu-Gi-Oh! ZEXAL and Yu-Gi-Oh! ARC-V, Xyz Materials are referred to as Overlay Units (abbreviated as ORU in Japanese and OLU in English) while attached to an Xyz Monster. Overlay Units are depicted as orbs of light orbiting the body of the Xyz Monster, and glow with the color associated to the Xyz Monster's Attribute (e.g. LIGHT Xyz Monsters have yellow Overlay Units). When performing an Xyz Summon, the cards being used as Xyz Materials turn into colored orbs, whose color matches their own Attribute, before briefly spiraling around each other in a helix and entering a bright swirl of energy called Overlay Network.

Uniquely, the Overlay Units of "C" Xyz Monsters of Barian origin are instead referred to as Chaos Overlay Units (abbreviated as CORU). In contrast to regular Overlay Units, they are depicted as magenta crystals that are stationary (not orbiting) and arranged in front of or behind the monster, often lined up.

When the player detaches Overlay Units from an Xyz Monster for its own effect, those Overlay Units are displayed being consumed by the Xyz Monster, such as by being eaten or absorbed by a weapon it carries. In some cases, the Xyz Monster will glow with its Attribute's color for a moment before unleashing the effect. When instead detached by another card's effect, the Units are often dragged away from their orbit into a purple Graveyard portal.

In ARC-V, while Overlay Units are still usually depicted as being absorbed by the Xyz Monster when detached, sometimes they are instead flung in another direction. For example, when "Raidraptor - Rise Falcon" uses its anime effect to gain the total ATK of all opponent's monsters that were Special Summoned, the used Overlay Unit is sent flying towards the field of the other player(s). However, these animated effects tend to be much less elaborate than in ZEXAL, often simply causing the Overlay Unit to disintegrate while still in its orbital path.

In Yu-Gi-Oh! VRAINS, the trail left by Overlay Units gains a cybernetic pattern; Overlay Units themselves are depicted rotating behind the monster (in a way reminiscent of an infinity symbol) instead of orbiting the Xyz Monster's body, and are always an yellowish-orange color irrespective of the monster's Attribute.