From Yugipedia
(Redirected from Rush Duel)
Jump to: navigation, search

Rush Duel was introduced internationally with the release of the video game Yu-Gi-Oh! RUSH DUEL: Dawn of the Battle Royale!![2], but the physical card game is currently exclusive to Japan and Korea.[3] 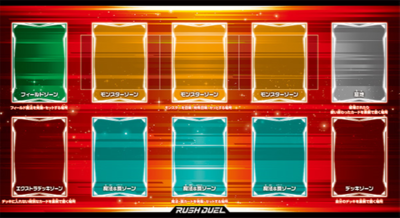 Being a derivative of the OCG, Rush Duel shares similarities with it, with some notable alterations and additions. Differences that Rush Duel was advertised as having include:

Other rule differences include:

Rush Duel cards use a new layout intended to be simple to understand and visually appealing. Art frames and effect text boxes are significantly larger; the Level value is altered to display a number over the Level star graphic along the ATK and DEF values and moved above the Type line, and the cards have "RUSH DUEL" printed at their base.

As Rush Duels are treated as a different card game, Yu-Gi-Oh! Rush Duel products run in a separate product line to Yu-Gi-Oh! Official Card Game products. The first sets released for Rush Duel were Starter Deck Yuga - Cut Through! Sevens Road!! and Starter Deck Luke - Explosive Supremacy! Dragias!!, which could also both be purchased in one set.

The following sets contain cards that can be used in Rush Duels:

In Yu-Gi-Oh! SEVENS, Rush Duels were created by main protagonist Yuga Ohdo as an alternative format that anyone can enjoy, in contrast to the "rigid" Duels run by adults.[7]

In Yu-Gi-Oh! GO RUSH!!, Rush Duel is a card game created by the Goha Company and originating from Earth, whose existence spread into the depths of space and became a legend among the people of the Velgear Star Cluster. Main protagonist Yudias Velgear believes that this "Rush Duel" would be the way for his war-torn people to finally achieve peace.

The serialized manga Yu-Gi-Oh! SEVENS Luke! Explosive Supremacy Legend!! features Tatsuhisa Kamijo (also known as Luke) as its protagonist, in contrast to the anime. In the manga, Luke Duels various opponents with Rush Duel, aiming to become the King of Duels.

The serialized manga Yu-Gi-Oh! GO RUSH!! uses the Rush Duel format. Yudias Velgear believes that the non-violent nature of the Rush Duel card game would be the way for people to finally be able to end conflicts without bloodshed.