Beast-Warrior (Japanese: ) is a Type of Monster Card.

They usually resemble anthropomorphic animals or other half-man, half-animal creatures such as centaurs. Their effects generally apply after destroying a monster, and help them destroy monsters more easily, but many of their effects also deal with Normal Monsters or give an advantage during battle, like "Exarion Universe" and "Enraged Battle Ox". Devon Knox's Main Deck in Yu-Gi-Oh! ZEXAL is primarily composed of these monsters, while Celina uses them in Yu-Gi-Oh! ARC-V and Yosh Imimi uses them in Yu-Gi-Oh! SEVENS. 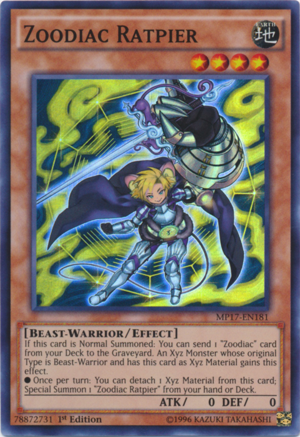