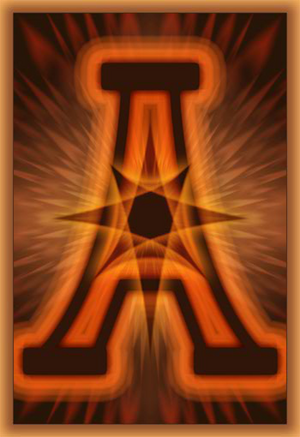 The backing of an Action Card

Action Cards (アクションカード Akushon Kādo) are cards used exclusively in Action Duels, which appear in the Yu-Gi-Oh! ARC-V anime. They are not real cards, but are created with the "Solid Vision with Mass" effect as soon as the Dueling Field is created. 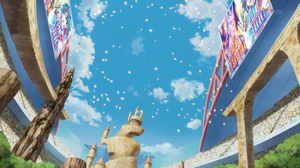 Action Cards being spread in the field.

An Action Duel can only take place if a Field Spell Card that allows the activation of Action Cards is active. When an Action Duel begins, Action Cards are disbursed in a fashion fitting the theme of the active Field Spell, which means the cards can be spread out immediately for the Duelists to find or can be made available at different times via the field's setting. Duelists can search for them during the Duel, and if they find an Action Card they can add it to their hand. Duelists can only hold on to one Action Card at a time.[1] Each player has a time limit during their turn in order to keep them from stalling the Duel in a continuous search for Action Cards.[2]

The most common action card is "Evasion" with "Miracle" being a close second due to their simplicity, with at least one of these action cards being available on almost every action field to date and being particularly common on the Lancers' "Cross Over" action field.

Some duelists purposely refrain from searching for Action Cards, such as Yuya's friend Gong Strong, these duelists are called "Non-Action" or "Heavystrong" duelists. ("Steadfast" duelists in the original version.)

There are several Action Cards that appear in different fields and are usually used to help save the Duelist from an attack (such as "Evasion" and "Miracle"). However, there are some Action Cards that appear to be specific to the field they appear in, following its theme. Examples include "Twinkle Comet" correlating to "Cosmic Sanctuary" and "Extreme Sword" to "Sword's Cemetery".

Most Action Cards seen are Spell Cards. The Action Trap Cards that have appeared all activate automatically upon being touched. Since the Action Spells can be played when found, it would seem Action Traps for the opponent would be moot and the Traps are intended for those who pick them up. Not all Action Spell Cards necessarily bring advantages to those who picked them up, as seen with Mad Hurricane, a card that shuffles all cards a player controls back into the Deck. Action Field Spell Cards can also be found and activated during the Duel as seen with "Quiz Quest - Extra Stage".[3]