From Yugipedia
Jump to: navigation, search
This article is about the entity. For the corresponding card, see Genesis Omega Dragon (card).

"Genesis Omega Dragon" (・・ Jeneshisu Omega Doragon)[1], or "G.O.D." ( Goddo), is a mysterious card in the Yu-Gi-Oh! ARC-V manga. As the being behind both the necessity for the World Illusion and fueling Eve's quest to find Adam, it is the primary antagonist of the manga.

It is described as the ultimate monster with the power to decide the fate of the world. It was foretold that the one who has the card will destroy the world, and so Yuya and his other personalities are searching for the card to prevent that from happening. To aid in this quest, Yuya's hideout has a special computer that will automatically notify him when someone puts information about the card on the internet.[2] Eve eventually is revealed to be holding the card, which came into existence due to experiments conducted by her and Adam.

Genesis Omega Dragon is a large serpentine dragon with long dark blue armor plates shaped like thin rounded rectangles and a purple belly. It has no legs; its heard and arms are covered in white armor marked with dark teal. It has long arms with long blue claws on the hands and blue flames trailing from its wrists. It head is shaped in a similar manner to the "V" emblem worn by Eve, it has jagged blunt jaws, a gold-bordered emerald on its forehead, and glowing yellow eyes, and it is bound by chains, wrapping its body around a white circular gate that leads to its makers. White spikes float around its body.

Genesis Omega Dragon sees itself as a simultaneous bringer of hope and despair, granting people the time they desire, but instilling in them a feeling of utter hopelessness at the state of the world. However, it fears those individuals who retain hope, and it brings them under its thrall after they have lived their lives in the timeline it created for them.

Genesis Omega Dragon can manipulate time and space. It uses this ability to create timelines where certain events never happened, and by building up these events, driven by the personal satisfaction of individuals, it effectively destroys a world, as people driven entirely by personal satisfaction prevent civilization from adapting. 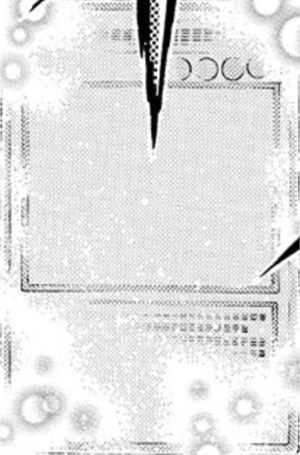 "Genesis Omega Dragon" manifesting as a card in the real world

Genesis Omega Dragon was created by unknown makers and sent to the human world through a gate. It came into the hands of various owners, each time promising to create a perfect world for them. Due to everyone who used its power satisfying their own personal interests, their civilizations came to a halt, resulting in the destruction of their planets.[3]

Isaac believed that Genesis Omega Dragon came into being when the great scientist Adam uncovered a vast amount of energy and sealed it within a card, but in truth it only sealed a portion of the power when it came to their world. Noting the energy is living, Adam used the card to become omnipresent across the world's timeline and believed its use could benefit mankind. But the G.O.D. card nearly caused a disaster, with Adam absorbing the energy and being scattered across time and space as the Adam Factor which limited the G.O.D. card's full potential.[4] Ren adds that the G.O.D card, despite being weakened by Adam's sacrifice, influences others to carry out its will at a subconscious level. Among such cases is Adam's lover Eve, who keeps the G.O.D. card on her person to travel through time to find Adam while she and Isaac gather followers.[5] Among the powers the G.O.D. possess, as shown with Ren, was that it can give people near death a second chance at life and render them ageless by removing them from the causality of time itself.[6]

At some point in the future, Leo Akaba and Yusho Sakaki were influenced by G.O.D. to revive the Solid Vision with mass technology which Adam originally established. During one of Leo's experiments to create an artificial virtual dimension in the real world, Reiji Akaba assuming it to be the monster's point of origin, it created a worm hole that enabled the G.O.D. card to enter their time.[7] From there, it would influence the chain of events that result in Yuya and Reiji being sent back two decades in the past after their time was destroyed in a calamity.

Yuya and Reiji, the former seeking it as his father's last request, learn from Ren that the "G.O.D." card is currently in Eve's possession, and that they are targeted for the Adam Factor they possess which would unlock the monster's full power once with the Eve Factor.[1] After Ren is defeated by Yuya, he muses if the youth is truly able to resist the G.O.D. card's influence.[8]

Genesis Omega Dragon finally made its appearance during Yuya's Duel with Eve in a tear in space-time. Eve Special Summoned it with the Pendulum Effect of "Mystic Hell Gate", merging with the dragon and falling under its control. The Adam Factor - G.O.D.'s power - within Yuya resonated with the G.O.D. card, showing Yuya, Yuto, Yugo and Yuri memories of its purpose. Yuya and his brothers accused G.O.D. of ruining their lives and the lives of Eve's followers, and of being scared of the hope that people like Ren and Sora demonstrated.[3]

Following its defeat, Yuya and Reiji Action Dueled for the card; Yuya wanted to destroy it, while Reiji - who had been given Adam's Adam Factor - wanted to explore its power.[11] They used their Adam Factor to generate a battleground and their G.O.D. monsters clashed, but ultimately, the two G.O.D.s were destroyed and the Duel came down to a sprint for an Action Card that Yuya won.[12] Yuya subsequently destroyed the "Genesis Omega Dragon" card, before departing with Reiji, Isaac, and Ren to the gate where G.O.D.'s makers dwelled.[13]