Zuzu's bracelet, known as Yuzu's bracelet (のブレスレット Yuzu no Buresuretto)[1] in the Japanese version, is one of Four Dimension Bracelets an item owned by Zuzu Boyle and formerly owned by Ray Akaba. The bracelet represents all summoning methods, including Pendulum Summoning, in the Yu-Gi-Oh! ARC-V anime.

It is a metallic, double-banded bracelet which seems to have a slightly larger circumference than Zuzu's wrist. It has two pink stones set on either side of the bracelet where the bands intersect, framed by a simple rose design.

According to Zuzu's design sheets, the bracelet can be folded.[2]

The metallic bands are reminiscent of Xyz Material when unfolded and intersecting, and Synchro Material when folded. The twin stones on either end of the bracelet resemble the Pendulum Zones, while their spiral rose patterns resemble Fusion.

The bracelet's flower-based design might also be inspired by "the traditional themes of natural beauty in Japanese aesthetics" (), with "" (flower) representing Zuzu and her flower-themed extra deck monsters "Bloom Diva the Melodious Choir" and "Bloom Prima the Melodious Choir.

If any of Yuya's dimensional counterparts approach Zuzu while she is in the presence of another of them, including Yuya himself, the bracelet will warp one of them away, which is usually the one closer to her. This includes their personal belongings, and anyone or anything they happen to be touching, including the user. It occurs automatically, regardless of the will of any of the people involved, as none of them have any idea of what is happening.

As a warning, the jewels on the bracelet will blink if Zuzu approaches Yuya and his counterparts who are in close proximity to each other. The glow becomes stronger the closer they are.[4] However, until a certain distance between them is reached, neither are teleported away.[5] 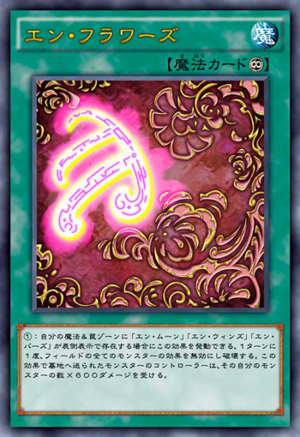 The bracelet was originally a card created by Leo Akaba using natural energy from flowers. It was used with the other three cards to confront Z-ARC, however, Ray took them from her father in order to oppose Z-ARC herself. During the Duel, the card took its shape as the bracelet and appeared on Ray's right arm. Along with the others, the bracelet helped her stop Supreme King Z-ARC, and split him, along with herself and the Original Dimension. Later, Zuzu gained ownership of the bracelet.[8]

According to Skip Boyle, Zuzu has always owned this bracelet.[9] Zuzu had the bracelet even as an child, and would wear it on a string around her neck.[10]

The bracelet activates for the first time.

Initially, the bracelet appeared innocuous[11] until Zuzu met Yuto for the first time. After Sylvio's Duel against him ended, the bracelet glowed with a pink light, causing Yuto to vanish. This happened on its own accord, with no input from Zuzu, who was shocked, having never seen it behave that way before. Immediately after that, Yuya showed up.[12]

Later on, Zuzu met up with Yuto again, who had been tailing her for some time. After a confrontation between Sora, Julia, Zuzu and Yuto occurred, the bracelet glowed again. Yuto vanished and, as with the previous time, Yuya showed up in short order.[13]

The bracelet continued to do this, even when Zuzu was not aware of Yuto's presence. It activated upon Yuya's arrival and transported him to Shay's location, where the latter was Dueling Herc. Zuzu later questioned her father on the origin of the bracelet, and when he said that she'd always had it, she called him out on how nonsensical this answer was and stormed off to her room. Sora has also jokingly stated that the bracelet seemed like a sensor meant to find Yuya.[9]

The phenomenon happened again after her first encounter with Shay. Shay was planning on Dueling Julia, however, upon noticing Zuzu, he mistook her for his sister, Lulu Obsidian. Yuto, who appeared shortly after Shay challenged Julia, knocked out his comrade just as he started getting excited, telling him that Zuzu was not Lulu. As Yuto carried Shay over his shoulder, they were quickly approached by Kit, Dipper and Yuya, causing the bracelet to react. After the light diminished, both Yuto and Shay were gone, leaving everyone confused, with none more so than Zuzu herself, who started sobbing in frustration.[14]

When Zuzu arrived to help Yuya in the aftermath of Yuto's Duel with Yugo, her bracelet glowed once more and teleported Yugo away.[15]

Zuzu gets teleported away along with Yugo.

While she was pursued by Yuri, Zuzu begged inwardly for Yuya's help, and coincidentally, Yugo showed up, causing Zuzu's bracelet to activate and teleport Yuri away. The bracelet then activated again when Yuya arrived in the area, but this time, since Zuzu was in contact with Yugo, she and Yugo were transported away.[16]

After arriving in the Synchro Dimension, Zuzu explained to Yugo about her bracelet and its connection to Yuya and his counterparts and her inability to control its teleportation.[17] During the opening of the Friendship Cup, the bracelet began to resonate when Yuya entered the stadium, alerting Zuzu to Yuya's identity.[5]

During Yuya's Duel with Crow, Zuzu's and Celina's bracelets resonated when Yuya synchronized and Awakened with his counterparts simultaneously, alerting Zuzu that something might have happened to Yuya.[18] After Yuya won the Duel, the bracelets stopped resonating, causing Zuzu to be increasingly worried about Yuya's condition.[6]

Zuzu using her bracelet as an compass to find Yuya.

After Zuzu escaped from the Underground Labor Facility, her bracelet started to resonate again with Celina's when Yuya, Yugo, and Yuri were in the same location with all Four Dimensional Dragons out in the field and she uses it to track down Yuya's location.[7] Upon reaching Yuya's location, her bracelet activated and transported both Yugo and Yuri away. The bracelet also sent Yuya flying but he crashed into the ceiling, forcing him out of his synchronized awaken state. Her bracelet and Celina's also stopped resonating together when everything returned to normal.[3] 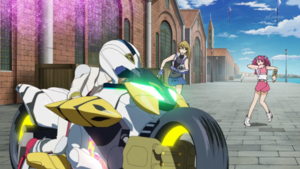 Zuzu's bracelet warps Yuri away due to Yugo's arrival.

When You Show Duel School students revealed a Duel Academy student is Dueling, Alexis and Zuzu go to help out only to find the Duelists defeated. Yuri seals them into cards and sees Zuzu. He planned to take her back to Duel Academy before Zuzu's bracelet warps him away again when Yugo appeared in the Fusion Dimension.[19] 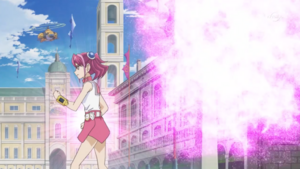 Zuzu's bracelet warps Yugo away due to Yuya's arrival.

While Yugo and Zuzu were chased by Duel Academy soldiers and attacked by "Ancient Gear Soldier's" and "Armor Canine - Bullcopter's", they were cornered. Yugo was ready to protect Zuzu but her bracelet activated and teleported him away due to Yuya arriving in the Fusion Dimension.[20]

When Zuzu was transferred into the ARC-V Reactor[21], her bracelet returned to its card form. It was then taken with the other three cards by Leo to use against Z-ARC again, but they were destroyed by Z-ARC, who defeated Leo.[22] However, using Riley's body, Ray retrieved the Four Nature Cards from the Graveyard and activated them to slowly strip away "Supreme King Z-ARC's" protection effects and causing the Four Dimension Bracelets to materialize on Riley's arm. With Yuya's help, Ray defeated Z-ARC again with the effects of the Four Nature Cards and Riley sealed away Z-ARC's spirit within her own body to prevent his soul from being split again.[23]

Following the battle against Z-ARC and the Standard Dimension's rebirth into the "Pendulum Dimension", the bracelet disappeared following Riley's regression into an infant.[24]