Celina's bracelet is one of the Four Dimension Bracelets owned by Celina and formerly owned by Ray Akaba. The bracelet represents Fusion Summoning in the Yu-Gi-Oh! ARC-V anime.

The bracelet at different angles.

It is a thin, metal bracelet which seems to have a slightly larger circumference than Celina's wrist. It consists of two rings, with the smaller ring locked into the larger one by two metal loops on either side. A single purple, star-shaped gem sits on the bottom of the smaller ring in the center of a metal platform that allows the gem to rotate back and forth inside of the smaller ring.

The metallic bands intersecting create a moon-shaped design that is additionally reminiscent of Fusion Materials. Said design might also be inspired by "the traditional themes of natural beauty in Japanese aesthetics" (花鳥風月), referencing the "月" (moon) for Celina and her Lunalight deck. 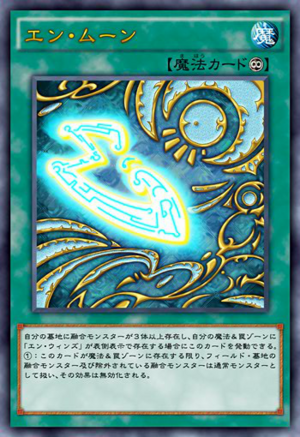 The bracelet was originally a card created by Leo Akaba using natural energy from the moon. It was used with the other three cards to confront Z-ARC, however, Ray took them from her father in order to oppose Z-ARC herself. During the Duel, the card took its shape as the bracelet and appeared on Ray's right arm. Along with the others, the bracelet helped her stop Supreme King Z-ARC, and split him, along with herself and the Original Dimension. Later, Celina gained ownership of the bracelet.[3]

Following the events of Z-ARC's defeat, Leo traveled to the Fusion Dimension in hopes of finding Ray. However, he discovered Celina and believed her to be Ray due to their appearance and was fully convinced when he notice the bracelet on her wrist.[3]

Celina was seen wearing this bracelet when Declan grabbed her arm.[4]

During Yuya's Duel with Crow, Celina's bracelet began to react for the first time while she was in New Domino City catching the attention of Moon Shadow and Riley and causing Celina to wonder what is going on. It also resonated along with Zuzu's when Yuya both synchronized and Awakened along with his counterparts after Roget activated the chip secretly installed in Yuya's helmet.[5] After Yuya won the Duel, the bracelet stopped resonating.[1]

Celina's bracelet began to resonate again the same time Zuzu's did and after the Four Dimension Dragons were on the field in the same place. The resonance of the two bracelets began to glow stronger when Yuya and his counterparts awakened and synchronized again.[2] Their resonance ended again when Zuzu arrived at Yuya's location and her bracelet teleported Yugo and Yuri away who were near him.[6]

When Celina was transferred into the ARC-V Reactor[7], her bracelet returned to its card form. It was then taken with the other three cards by Leo to use against Z-ARC again, but they were destroyed by Z-ARC, who defeated Leo.[8] However, using Riley's body, Ray retrieved the Four Nature Cards from the Graveyard and activated them to slowly strip away "Supreme King Z-ARC's" protection effects and causing the Four Dimension Bracelets to materialize on Riley's arm. With Yuya's help, Ray defeated Z-ARC again with the effects of the Four Nature Cards and Riley sealed away Z-ARC's spirit within her own body to prevent his soul from being split again.[9]

Following the battle against Z-ARC and the Standard Dimension's rebirth into the "Pendulum Dimension", the bracelet disappeared following Riley's regression into an infant.[10]