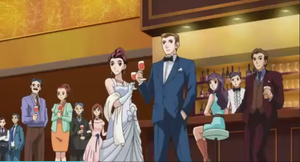 The Topsiders, known as Tops (トップス Toppusu) in the Japanese version and as a shorthand in the English version, refers to the upper class of New Domino City's society in the Yu-Gi-Oh! ARC-V anime.

Topsider is derived from the word Top, meaning "high".

New Domino's society is entirely competition based, where the "winners" stand to gain everything, and the "losers" stand to lose everything. The upper 1% of New Domino's population is known as the Topsiders. They control 99% of the city's wealth, and live in a magnificent cityscape of highways, skyscrapers, villas, and even smaller metropolises that tower high above the slums of the Commons, or the remaining 99% of the population, reside in. It is patrolled by Sector Security, who will apprehend any Commons that are in Topsiders-exclusive areas without authorization. The Topsiders openly discriminate against the Commons, with the possible exception of Commons who are able to achieve great things and become Topsiders themselves, such as Jack Atlas, who won the Friendship Cup and became Duel King.[1] Even their places at tournaments have a clear divide; Commons sit in an ordinary stadium, while Topsiders generally have private boxes and rooms separate from Commons, though there are exceptions.

During the Arc League Championship, Yugo and Zuzu Boyle were transported to a Topsiders-exclusive area by Zuzu's bracelet, where the two explained to each other their knowledge of the events that had transpired before they were discovered by Topsiders residents, prompting them to flee on Yugo's Duel Runner only to be forced into a Turbo Duel by Sector Security.

During a Sector Security raid, the Topsiders that were present were escorted from the scene while the Commons were all arrested, as seen with the Underground Dueling Arena.

After the Friendship Cup Duel between Yuya Sakaki and Jack, the concept of the Topsiders was dissolved, as per White Taki's announcement of the High Council's disbandment.