A Turbo Duel, known as Riding Duel (ライディングデュエル Raidingu Dyueru) in the Japanese version, is a type of Duel conducted while driving a Duel Runner or Duel Board. They are prominently featured in Yu-Gi-Oh! 5D's, but also appear in Yu-Gi-Oh! ARC-V and Yu-Gi-Oh! SEVENS.

In the Japanese version, when a Turbo Duel starts in a stadium, usually an MC will shout "Riding Duel! Acceleration!"

Turbo Duels usually require a "Speed World" Field Spell Card to be activated at the start of the Duel. In Yu-Gi-Oh! 5D's, "Speed World" cards prevent or penalize the usage of Spell Cards other than Speed Spells. During a Turbo Duel, Duelists accumulate Speed Counters over time, which they can use to facilitate the activation of Speed Spell Cards.

At the start of a Turbo Duel, the Field Spell "Speed World" or "Speed World 2" is automatically activated. Sector Security can force a suspect into a Duel by forcibly activating one of these Field Spells on the suspect's Duel Runner.

Turbo Duels came with the advent of Ener-D, the power created from the positive energy of Dueling that powers the city's technology, including their vehicles. Turbo Duels were created when KaibaCorp thought to invent a sport that took advantage of an Ener-D-powered vehicle, as it adds many new dynamics to Duels.

The exterior element of movement is the key idea behind Turbo Duels, as it adds an unexplored element of dodging, riding skill, intimidation and imagination. Turbo Duels are much more intense than regular Duels, from not only the danger, but also because the Duelists are connected to the world of speed, connecting the Duelists emotions to each other. Dodging attacks also seems to be an aspect of Turbo Dueling, in that Duelists will maneuver their Duel Runner to physically avoid attacks.

Turbo Duels add the potential for new rules that take advantage of the Duel Runners on which players ride, as shown by the Yu-Gi-Oh! 5D's tag team rules and the exterior element of optimizing your Duel Runner adds a new level of skill and culture to the Duels. The varying distance between the players adds the element of keeping up with your opponent to better react to their moves, which adds another element of movement to Dueling. Turbo Duels make Dueling into a sport akin to jousting, especially in that the most famous Duelists Turbo Duel in the rich part of the city.

Turbo Duels in the Yu-Gi-Oh 5D's manga do not use Speed Spells, Speed Counters, or a "Speed World" Field Spell.

While most rules are similar to Ground Duels, Turbo Duels in the manga do have several differences. If a Turbo Duelist's Duel Runner stops, they lose the Duel. The first Turbo Duelist to cross the finish line wins the Duel instantly. 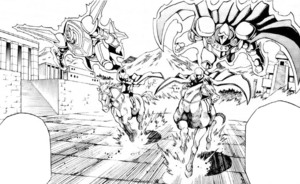 In ancient times, Turbo Duels were rituals designed to fight and seal the darkness. They were conducted with horses and stone tables rather then Duel Runners and cards. The Duel Dragon cards were specially designed for such rituals.[1]

A Turbo Duel between a Duel Priestess and a Duel Priest was an annual religious event, which, depending on the results, could awaken the Ultimate God. In the present day, Rex and the Skeleton Knight conduct this ritual once again, using Akiza Izinski and Sect Ijuin as the Duelists in a modern Turbo Duel.[2]

When a Duel Dragon card transported Yusei Fudo and Crow Hogan to ancient times, Yusei underwent a ritual to obtain the card—a One-Shot Run Duel against a Priest of Light. Yusei used his "Lightning Warrior", while the priest used his "Stardust Spark Dragon". Yusei eventually accepted the dragon's blow and concluded the ritual, obtaining the card.[3]

Turbo Duels in ARC-V do not use Speed Spells or Speed Counters.

Action Duels have been combined with Turbo Duels, allowing Action Cards to be used during the Duel.

Turbo Duels appear in the Synchro Dimension. According to Frank, Tarren and Crow, the Turbo Duels were created by Commons as a way to outwit the Topsiders. However, Sector Security formed the Duel Chasers in order to stop the Commons who Turbo Dueled in New Domino City and the Tops started to broadcast the pursuits as entertainment.

Turbo Duels in the Yu-Gi-Oh SEVENS anime do not use Speed Spells, Speed Counters, or a "Speed World" Field Spell.

The goal appears to be of importance; even though Yuga defeated Yuro, he appeared to be required to make it to the goal before him to win the Duel.

Yuro Goha is a Turbo Duelist, and he Duels against Yuga Ohdo in a "Turbo Rush Duel".

The vehicles used by Yuga and Yuro are never described as Duel Runners—Yuro uses a hovering machine that resembles a Speed Loader, while Yuga a modified air conditioning device capable of flight and powered by Kaizo. However, the Phoenix Whirlwind was seen in the Goha Duel Museum.[4]

Certain Trap Cards can manipulate Speed Counters, such as "Speed Booster". These cards may be included in a non-Turbo Deck, but have no effect in a normal duel. Over the Nexus also introduces a Tag Turbo Duel, which functions as a combination of a Tag Duel and a Turbo Duel.

In Yu-Gi-Oh! Duel Links, Turbo Duels are available on certain events. These include Raid Duel - The Flames of Vengeance: Ccapac Apu!, which has the player Duel in a Turbo Duel against an NPC, and Turbo Duel Grand Prix, which allows players to Duel each other in Turbo Duels.

Similar to its Yu-Gi-Oh! 5D's counterpart, players gain Speed Counters, which can be used to apply a number of effects via an EX Skill. The conditions in which the player gains Speed Counters vary from event to event, but often include triggers such as Normal Summoning a monster, or beginning a new turn.