Negate (Japanese: () Mukō(ka)) is a term that refers to stopping an action from being performed successfully or nullifying a card effect. Actions that can be negated include card and effect activations, Summons, and attacks. 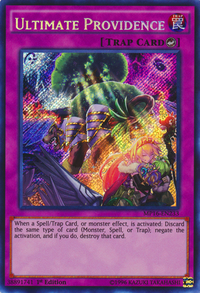 To negate the activation of a card or effect is to cause it to not resolve after being activated. An activation can only be negated by a card effect that specifically uses the term "negate".

If a card or effect has a restriction on how often it can be activated, the specific wording of the restriction affects affects whether negated activations count towards this limit. 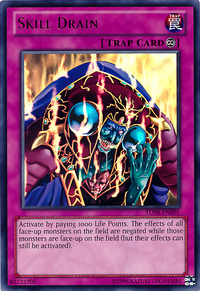 To negate an effect is to prevent it from being applied. A card effect can only be negated by a card effect that specifically uses the term "negate".

If Continuous Effects or Unclassified Effects are negated, they simply no longer apply.

If an effect that makes a Chain Link is negated, it resolves without effect. However, this does not prevent these effects from being activated. For example, even if the effect of "Cannon Soldier" is negated by "Effect Veiler", it can still be activated by Tributing a monster, but its effect will be negated when it resolves and the opponent will take no damage. 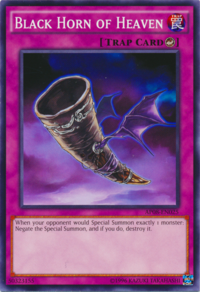 To negate a Summon is to prevent a monster from being successfully Summoned. A Summon can only be negated by a card effect that specifically uses the term "negate".

In Problem-Solving Card Text, effects that can negate Summons specify that they activate when the monster(s) "would be Summoned". These effects can only be activated at Chain Link 1 in response to an attempted Summon.

Only Summons by game mechanics (Normal, Flip, and Pendulum Summons, as well as Extra Deck Summons other than Fusion Summon) and Summons by Summoning procedures (including both those of Normal Summon Monsters and Special Summon Monsters) can be negated, and only when they occur outside of a Chain. Other Summons cannot be negated, even if they occur outside of a Chain (e.g. "Memory of an Adversary", "W Nebula Meteorite"). Activated effects that perform Summons via game mechanics specify that the Summon is performed "immediately after this card/effect resolves", meaning that the Summon occurs outside of the effect's resolution; if the effect resolves as Chain Link 1 the Summon can be negated, but if the effect resolves as Chain Link 2 or higher the Summon cannot be negated, as the Chain is still resolving when the Summon is conducted.

All card effects that negate a Summon will also move the monster to another location outside of the field, usually by destroying it. If a monster's Summon is negated, but the effect to move it to a different location cannot be applied, then the monster is sent to the Graveyard.[1] 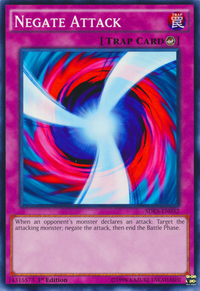 To negate an attack is to stop a battle from taking place after an attack has been declared. An attack can only be negated by a card effect that specifically uses the term "negate".

An attack can only be negated during the Battle Step, and if it is negated, the Damage Step does not occur. Even if an attack is negated, that monster is still considered to have declared an attack that turn, so it cannot declare another attack and cannot change its battle position in Main Phase 2.

Cards such as "Mirror Force" and "Dimensional Prison" do not negate attacks; instead, the attacking monster leaves the field during the Battle Step and the attack ends; if the monster does not leave the field, the attack continues. For example, if "Total Defense Shogun" attacks while in Defense Position and the opponent activates "Mirror Force", the attack continues as "Total Defense Shogun" is still on the field. Likewise, even if an attacking monster is banished by "Dimensional Prison", "Counterforce" cannot be activated because its attack was not negated.