There are two types of actions a player can make: actions that start a Chain (actions with a Spell Speed) and actions that do not start a Chain (actions without a Spell Speed). Whether or not an action starts a Chain determines how players are able to respond to the action in accordance with fast effect timing. Remember: if something activates, then it starts a Chain. If something does not activate, it does not use the Chain.

If your action has a spell speed, then it starts a Chain. Activating a Spell/Trap Card or effect and activating the effect of a monster all have Spell Speeds and all start Chains.

If the action does not have a Spell Speed, then it does not start a Chain (it does not activate). Performing a Normal/Synchro/Xyz Summon, Setting a card, declaring an attack, drawing for your normal draw, etc.

All actions can be responded to by either player with fast effects in accordance with the "Fast effect timing" chart. 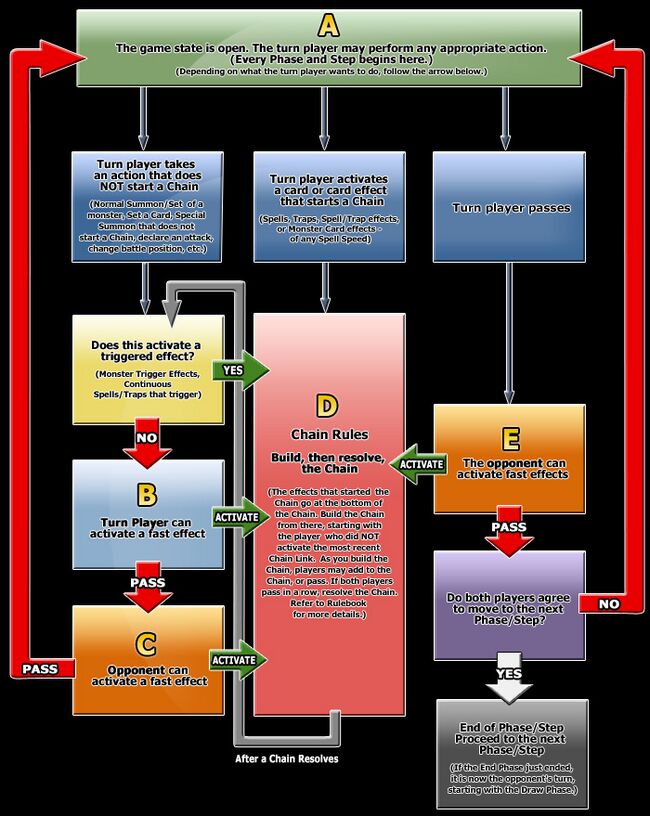 Responding to Actions That Have a Spell Speed[edit]

If an effect activates “when” an action that has a Spell Speed occurs, you must activate that effect in the very next Chain Link. If there is a Chain Link between the activation and the effect you want to respond with, it is no longer “when” that action has occurred, and you can no longer respond to that activation.

“When a card or effect is activated…”

"Your opponent cannot activate cards or effects in response to this effect's activation."

Responding to Actions That Do Not Have a Spell Speed[edit]

There are many actions which a player can perform that do not have a spell speed, and thus do not use the Chain. These are all actions which players can respond to. It is important to note that although the actions may all be different, the mechanics governing how you respond to them are all the same.