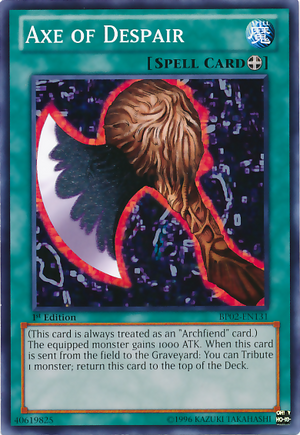 "Axe of Despair" from Battle Pack 2: War of the Giants. The archetype condition is the first line of its card text.

An archetype condition is a condition that says a card is a member of an archetype even if the card's name does not include the archetype's name.

For monsters other than Normal Monsters, an archetype condition is always listed at the beginning of the card text (but after Materials, if any); Normal Monsters instead list it at the very bottom of the text box. (Previously, non-Normal non-Effect Monsters also placed it at the bottom of the text box, as seen with the various prints of "Black Skull Dragon".) On Japanese cards, they are simply written as a regular sentence as part of the main body; on non-Japanese cards, they are always in parentheses and on a separate line from the rest of the card text.

Because an archetype condition is a condition and not an effect, it is unaffected by cards such as "Skill Drain". It is also the only text that can be printed in the lore box of a Normal Monster that can affect gameplay in any way (and is therefore not italicized). For a Pendulum Monster, it is the only text in the lore box that can affect gameplay while the card is placed in a Pendulum Zone.

Archetype membership is ordinarily determined by a card's name: an archetype's support (and anti-support) cards list a specific string in their effect, and a given card is a member of that archetype if its name includes that string. Because Yu-Gi-Oh! is originally a Japanese franchise, all such support is originally determined by Japanese names at time of card design. When cards are localized for non-Japanese regions, a suitable translation must be used to name the archetype, that name string must be used in the names of all archetype members, and no other cards must ever use that string in their names.

This system breaks down when archetypes are retroactively established: unrelated cards may be released whose names happen to contain a certain word or string, and then support cards are released much later that work on all old and new cards containing that string. That string is not considered an archetype until after support cards exist. However, in the meantime, the old cards may have already been localized without any common string in their names.

Initially, when English card texts referred to archetype members, they would write this as "a card that includes "[archetype]" in its card name"; in modern card texts, this is instead written as "a "[archetype]" card". This more long-winded text was a more literal translation of the Japanese text at the time.

The "Archfiend" archetype was the next archetype to encounter this localization issue. However, due to the large number of cards affected, Upper Deck Entertainment took a different approach. "Archfiend" was treated as a special category of card, with support worded as "an Archfiend card", formatting the support more like modern archetype support, but without quotation marks around the archetype name. On their website, Upper Deck Entertainment has a page explaining what an Archfiend card was, including a list of all cards without "Archfiend" in their English name that are "Archfiend" cards.[1]

"Archfiend" is a special category of card. Most Archfiends can be identified by their name. Any card with "Archfiend" in the card name, is an Archfiend.

In addition, several older cards are also considered to be "Archfiends." These cards include:

Other cases usually involved one or two outlier cards, so were handled the same way as "Amazon Archer"—with all support for that archetype specifically listing the outlier card's name. For example, "Manga Ryu-Ran", whose Japanese name was 「トゥーン・ドラゴン・エッガー」 ("Toon Dragon Egger"), is a "Toon" card, but the "Toon" archetype was not supported until the release of "Toon Table of Contents" 3 years after its first print; to resolve this, the original text of "Toon Table of Contents" specified "Add 1 card [...] that includes "Toon" in its card name, or is named "Manga Ryu-Ran". Similar cases occurred for "Phantom Beast Cross-Wing" and "Phantom Beast Thunder-Pegasus" needing to support "Gazelle the King of Mythical Beasts" (due to its Japanese name containing "Phantom Beast"); and "Ojama Country" needing to support "Ojamuscle" (due to its Japanese name containing "Ojama").

One more unique case would appear prior to the creation of archetype conditions: "Rainbow Dragon" and "Rainbow Dark Dragon" both had 「」 ("Ultimate Gem God") in their Japanese names and together formed an archetype with support, but their translated names had no usable shared strings. However, since at the time the archetype consisted of only these two cards, all three support cards at the time ("Rainbow Gravity", "Rainbow Neos", and "Rainbow Path") just used the phrasing "Rainbow Dragon" or "Rainbow Dark Dragon" instead of the Japanese equivalent of 1 "Ultimate Gem God" monster.

In European languages other than English, there is one additional case that predates archetype conditions: "Arsenal Summoner" supports the "Guardian" archetype, but this must include "Guardian Angel Joan". Due to language differences around the translation of the term guardian angel, "Guardian Angel Joan" has the exact word "Guardian" in Japanese, Korean, English, Spanish, French, and German; but lacks it in Italian and Portuguese ("Joan Angelo Custode" does not have "Guardiano", and "Joan, o Anjo da Guarda" does not have "Guardião"). The effect of "Arsenal Summoner" would then have to handle this on top of the many archetype exclusions at the same time. To resolve this, Upper Deck Entertainment worded the effect in all non-English European languages as (translated) Add 1 GUARDIAN card from your Deck to your hand., with the text formatting implying that Guardian is acting as its own special category, similar to the previous situation with "Archfiend" cards.

When releasing "Chimera the Flying Mythical Beast" in areas outside of Japan, a new problem arose: "Chimera", like "Gazelle" from before, also had "Phantom Beast" in its Japanese name. Since "Chimera" had already prominently appeared in the anime under its localized name, its name could not be changed for marketing reasons, and it was impractical to reprint all existing "Phantom Beast" support to include "Chimera" as well. Archetype conditions were created to resolve this, with "Chimera" receiving the line (This monster is always treated as a "Phantom Beast" monster.)—after the widespread adoption of archetype conditions, this was later updated to (This card is always treated as a "Phantom Beast" card.).

Several additional cards have since received archetype conditions for the same reason, including most cards mentioned above. In other cases, where an existing localized name is not well-known, cards have been renamed to include them under archetypes. For example, "Amazon Archer" had its English name changed to "Amazoness Archer" to include it in the "Amazoness" archetype, and "Oscillo Hero #2" had its English name changed to "Wattkid" to include it in the "Watt" archetype.

After its usage on "Utopia Beyond", archetype conditions became more common in Japanese. In Japanese, it is often used when releasing an anime- or manga-original card in the OCG to make it part of an archetype it is closely tied to, despite the archetype's name not appearing in its own. For example, the manga-original card "Contrast HERO Chaos" has a similar name in all released languages, but contains an archetype condition in all languages of the TCG and OCG stating that it is an "Elemental HERO" monster.

In English and other European languages, but not Japanese[edit]

The first archetype conditions to be made all fall into this category.

The four cards in the Skull Archfiend series are also another unique case: While their English and other European language names all include "Archfiend", they have a condition stating that their name becomes "Summoned Skull" when on the field (in order to receive "Summoned Skull"-specific support). Due to this, they require another condition on top stating that they are all still treated as an "Archfiend" card. This second condition is not needed in Japanese and Korean.

In Italian only, "Un Accordo col Signore Oscuro" ("A Deal with Dark Ruler") was later renamed "Un Accordo con l'Arcidemone" , allowing its archetype condition to be removed. This was likely done because the old name became doubly problematic with the creation of the "Darklord" archetype ("Signore Oscuro" in Italian), which would have otherwise required adding an archetype-exclusion condition on top of the archetype condition.

Only in Japanese and Korean[edit]

After archetype conditions began to be used outside of localizations, they began to appear on Japanese cards as well. This list mostly consists of cards whose localizations could conveniently or coincidentally still include the archetype name.

This notation is deprecated, presumably to make it clear that the condition applies even if the card in question is not currently treated as a monster, e.g. by becoming an Equip Card.