"Timelord", known as "Time Machine God" (, Jikaishin) in the OCG, is an archetype consists of Level 10 Fairy monsters used by Z-one in the Yu-Gi-Oh! 5D's anime. Eve also uses a member of this archetype in the Yu-Gi-Oh! ARC-V manga, the Synchro Monster "Timelord Progenitor Vorpgate".

In the anime, Timelords have a Rare rarity with exception of "Sephylon", which has an Ultra Rare rarity instead.

The Tree of Life and the Timelords 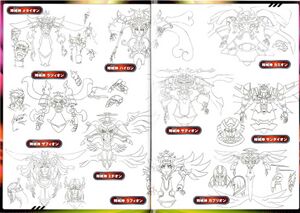 The first 10 "Timelords" are based on the 10 attributes or emanations of the Tree of Life, the mystic symbol used in the Kabbalah, known as the Sefirot. The 11th member, "Sephylon, the Ultimate Timelord", is named after the Sefirot itself (Sephirot). The "Timelords" are depicted as metal suits of armor with an angel face on their chest.

The first 10 "Timelords" each reflect a Sefirah, as well as an archangel. "Sephylon" reflects the mystical state where all 10 Sefirots become one, Da'at, and God.

"Timelord" monsters have a Stall and Burn playstyle. They protect the player from battle damage, while their other effects slowly damage the opponent. As they do not need to rely on Special Summons, many anti-meta cards can be used with them.

While the "Timelords" cannot be destroyed, they are not unbeatable and can can still be banished or Tributed. Their Summon can also be negated by a card like "Solemn Warning". To overcome these weaknesses, cards that protect against direct attacks can be useful.

In addition, cards that can negate the effects of "Timelord" are extremely useful, as that will strip them of all their protection and leave the opponent with a 0 ATK monster that cannot do anything. (However, this will be less useful against "Sandaion" and "Sephylon".)

Cards that can attack the opponent directly, such as "Earthbound Immortal" or "Toon" monsters can be very useful against "Timelord" monsters, as they can bypass their protection and effects and deal your opponent significant damage in the process.

"Timelord" monsters rely on attacking for their effects to activate, so any number of basic stall cards that aim to block the opponent's attacks will stop them as well, including battle position changers. However, this weakness can be overcome by using cards that force the "Timelord" monster to be attacked.

"Timelord" monsters are also especially weak against Blue-Eyes Twin Burst Dragon because it banishes any monster that is not destroyed by it when it attacks. Since the "Timelord" is banished, its effect cannot trigger and it bypasses the "Timelord" non-destroyable effect via banishment.