From Yugipedia
(Redirected from Continuous Trap)
Jump to: navigation, search

Continuous Trap Cards (Japanese: カード Eizoku Torappu Kādo) are Trap Cards that stay on the field after activation. The effect(s) of these cards will remain active until the owner cannot maintain the cost or condition(s) indicated on the card (if any) OR it is destroyed. One example of a Continuous Trap Card is "Spellbinding Circle", which effectively freezes an enemy monster on the field, so it can neither change battle position nor declare an attack.

Another example of a Continuous Trap Card is "Royal Decree", which negates Trap Cards' effects. However, since it is still Spell Speed 2, it cannot be used against cards like "Magic Drain", "Seven Tools of the Bandit", "Negate Attack", or "Trap Jammer", since they are all Counter Trap Cards, and thus Spell Speed 3.

Cards such as "Chain Burst" and "Curse of Darkness" have to be face-up on the field before the card it inflicts damage against is activated; you cannot chain these cards to the activation of the card type mentioned and still maintain the effect of inflicting damage. This is because the timing has been missed; the card in question has already been activated.

Activating the card and effect in the same Chain Link[edit] 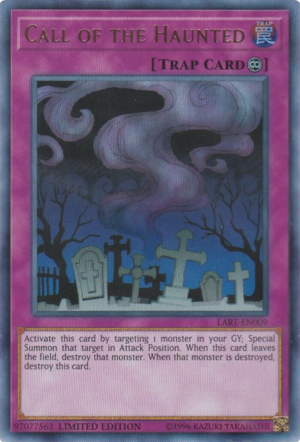 "Call of the Haunted"