An Equip Card, known as an Equipment Card (カード Sōbi Kādo) in the OCG, is a card that is equipped to a face-up monster on the field.

Cards other than Equip Spell Cards may be treated as Equip Cards through card effects, like with "Sword Hunter" or Union monsters' effects.

A monster treated as an Equip Card cannot have its equip target changed by other card effects,[2] except Union Monsters equipped by their own effects.[3]

However, equipped cards are still on the field, so effects or conditions that rely on a card "being sent from the field to the Graveyard", such as "Felgrand Dragon", still apply. (This is because they activate in the Graveyard, where they are monsters now, and not on the field.) Despite this, unless stated otherwise, Monster Cards cannot activate or apply their effects while treated as Equip Cards, as they are not monsters. 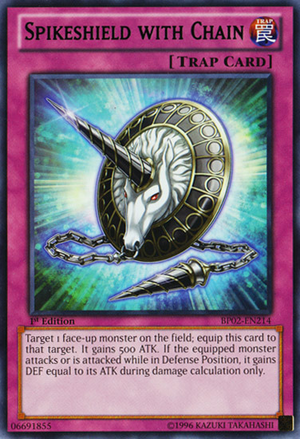