From Yugipedia
Jump to: navigation, search
This article is about the ability. For the archetype, see "Toon".

Toon monsters (トゥーンモンスター Tūn Monsutā) are Effect Monsters with the ability "Toon". They are all members of the "Toon" archetype, and are cartoonized counterparts of existing monsters. Their signature effect is the ability to attack directly, and not being able to attack the turn they are Summoned.

All Toon monsters are counterparts to other existing monsters, and typically also feature the effects of their original counterparts.

Originally, in the Yu-Gi-Oh! manga, Toon monsters were not individual cards, and were instead created when other non-Toon monster cards came under the effect of Maximillion J. Pegasus' "Toon World", and were transformed into their Toon counterparts. In their Toon forms, monsters could dodge attacks and hide within the "Toon World" book, and avoid being destroyed by battle.

In the Yu-Gi-Oh! anime, during the Duelist Kingdom tournament, Toon monsters functioned the same way that they did in the manga. 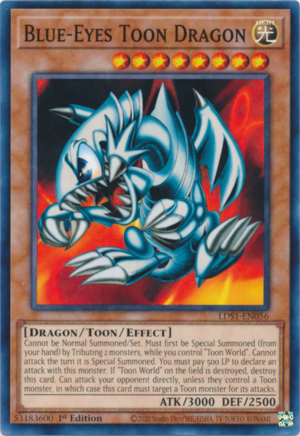