A wyrm (pronounced worm or vurm) is a type of dragon that commonly appears in British and Norse mythology. These dragons have no legs or arms and only the long, scaled body of a serpent. They are often given poisonous breath and the ability to regenerate or reattach pieces of their body that have been cut off.

Wyrm monsters resemble dragons, but unlike Dragon monsters, they take more of a spiritual, mythical, metaphysical look. Many Wyrm monsters exhibit Oriental or East Asian influences, such as the "Yang Zing" and "Tenyi" archetypes.

Although Wyrm monsters made their debut in Yu-Gi-Oh! ARC-V, no prominent characters from that series used them, although some of the "Yang Zing" monsters made cameos as cards that were used as bribes in the Facility. The first person to have used a Wyrm monster in the anime was one of the Knights of Hanoi, who used "Mystery Shell Dragon" in the Yu-Gi-Oh! VRAINS anime. Asana Mutsuba from the Yu-Gi-Oh! SEVENS anime is the first prominent Duelist in the anime to use a Wyrm Deck; Yuga Ohdo became the first main protagonist to use a Wyrm monster in the same series, having borrowed Asana's "Constructor Wyrm Buildragon" before his final Duel against Otes. In the Yu-Gi-Oh! OCG Structures manga, Shoma Yusa's first Deck was a largely Wyrm-based Deck containing "Tenyi" and "Yang Zing" cards. 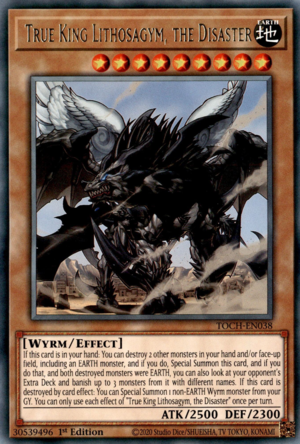