Reptile (Japanese: Hachūrui) monsters were once one of the most overlooked and undersupported types, their only real use previously being Tribute fodder for "Ultra Evolution Pill". However, with the release of the "Alien" and "Venom" archetypes, Reptiles have come into their own as a Type that focuses on controlling the opponent with the use of Counters. Many Reptiles focus upon weakening the opponent instead of strengthening themselves, often leaving the opponent powerless. Because of this, Reptile-based decks and archetypes focus on tactics that reward patience and strategy over simplicity and brute force. The most brutal example of this is found in "Vennominaga the Deity of Poisonous Snakes", which, while difficult to get onto the field, brought near-invincibility as well as one of the game's few Automatic Win conditions. Reptiles are used by Thelonius Viper, Seika Kohinata, Jim Crocodile Cook in the GX manga, Misty Tredwell, and Damon Lopez.

Later on, the "Reptilianne" archetype was introduced, taking a new spin on the control concept by replacing Counters with various effects that drop opposing monsters straight to 0 ATK, then using other effects to remove or even take control of those monsters.

Reptile members of the "Worm" archetype were later added, this time focusing on flip effects which affect the enemies.

Reptiles gain no boost from any Field Spell Card; however, Aliens do get a helping hand from "Otherworld - The "A" Zone" , while Venoms benefit from "Venom Swamp".

WATER and EARTH remain the most represented Attributes for Reptiles. 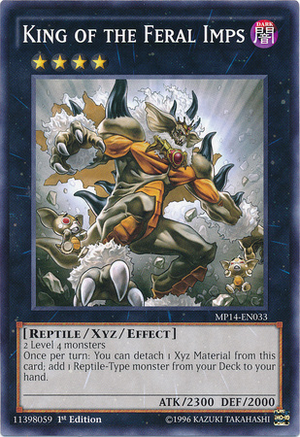 "King of the Feral Imps"
Retrieved from "https://yugipedia.com/index.php?title=Reptile&oldid=4499172"
Category: