Dinosaur (Japanese: Kyōryū) is a type of monster that primarily relies on brute strength, and sometimes Monster Effects, to help a Duelist prevail in a Duel. There are many high-level Dinosaur-Type monsters, so the general strategy for them is to Summon their high-Level monsters as quickly as possible using cards like "Hunting Instinct" or "Big Evolution Pill", overpowering the opponent's weaker monsters before they have a chance to defend themselves. Dinosaurs are predominantly EARTH-Attribute monsters (most of those that are or resemble pterosaurs are WIND), but the release of the "Jurrac" Archetype led to a surge of FIRE Dinosaur monsters, continued with the "Evolsaur" archetype, "Number 61: Volcasaurus", and "Pyrorex the Elemental Lord". Dinosaur cards are most notably played by Rex Raptor, Tyranno Hassleberry, Scorch, Chills, George Gore, and Kan Hakubutsu.

In the Falsebound Kingdom, Dinosaur monsters are treated as Dragon monsters.

Dinosaur monsters are rivaled by few (including extremely powerful Nomi monsters, high-Level Fusion Monsters, or Dragons) in terms of overwhelming brute force. They possess the first and only monster that completely breaks the rule of 3000 ATK, "Super Conductor Tyranno"; their Field Spell Card "Jurassic World" grants a higher ATK and DEF bonus than any other for specific Monster Types; and they have a powerful searcher, "Fossil Dig", a Spell Card that can add any Level 6 or lower Dinosaur monster from the Deck to the hand. They also possess an Elemental Lord monster, "Pyrorex the Elemental Lord". In addition, Dinosaurs can search monsters through "Miracle Jurassic Egg", which builds up counters to be Tributed for a big Dinosaur monster, or "Babycerasaurus", which combos well with "Torrential Tribute" or "Dark Hole". Unlike other Monster Types in which high-Level monsters risk being useless in the hand, Dinosaur monsters have numerous options for getting around Tribute requirements that make high-Level monsters the bread and butter of the Deck. Dinosaurs and Dinosaur support also have a few powerful field clearing cards, most notably "Jurrac Meteor", "Volcanic Eruption", and "Jurrac Impact".

The release of the Dinosmasher's Fury Structure Deck provides and expands on two avenues of focus for Dinosaur monsters in addition to their primary strategy of Summoning high-Level monsters; generating advantage through destroying their own cards, and Normal Monster support. Both have served as downplayed plays in the past. 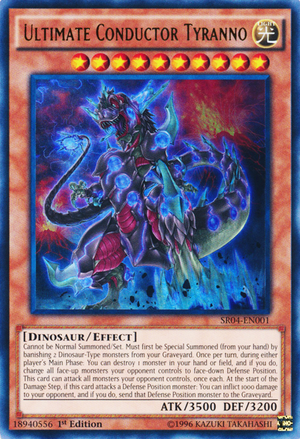