Fish ( Sakana) is a Type of Monster Card. Fish monsters are used by Reginald Kastle, Ren and Nanami Maguro.

In the past it had very little support, but it received support in Tactical Evolution, Phantom Darkness, The Duelist Genesis, Crimson Crisis, and Generation Force. Fish monsters were released in every core set from Generation Force until Duelist Alliance. Many Fish support monsters have effects that require the presence or Tribute of another Fish to activate, or focus on manipulating advantage through banishing (dubbed Generation Fish).

The first consistent strategy of a Fish Deck used to be to Summon "Superancient Deepsea King Coelacanth" and use its effect to Summon a combination of "Fishborg Blasters" and "Oyster Meisters" to Synchro Summon the cards required to perform an OTK. However, following the September 2011 List, this combo is no longer playable due to "Blaster" being Forbidden. This strategy can be used with "Fishborg Launcher", but Launcher has restrictions to what can be Synchro Summoned. A newer strategy is to use the Deepsea King's effect to summon Level 2, 3, and 4 Fish monsters so as to overlay them into Xyz Monsters that can prove to be quite difficult to summon on their own, such as "Number 96: Dark Mist" and "Number 10: Illumiknight". The release of the "Shark" monsters and the Generation Fish provided an Xyz strategy for Fish monsters, largely focusing on Rank 3-5 monsters, while the "White" monsters finally provided Fish with their own Synchro Monsters.

Fish Decks met with a reasonable amount of success at YCS Charlotte, with three Fish Decks making the top 32. 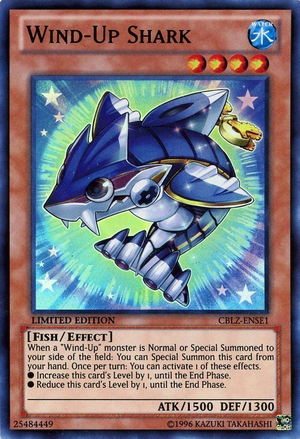