Ren is a mysterious character appearing in the Yu-Gi-Oh! ARC-V manga. 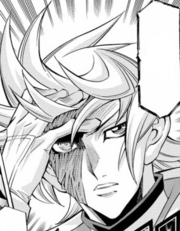 Later revealed to be a descendant of Yugo, Ren resembles his ancestor as an adult with a large scar like Eve's on the right self of his face.[1][2] His attire consists of a Turbo Duelist uniform, two capes, white trousers, and a pair of driving gloves that hides a burnt scar on his right hand. Prior to revealing his face, his hairstyle resembling Reiji Akaba's at the time, Ren wore a mask with different colors on each side and engraved with an insignia.

Ren possesses some of Yugo's traits, though he is more composed. Ren is also loyal, admitting of having no idea of what Genesis Omega Dragon itself desires, but intent to honor the pact he made with it and Eve. 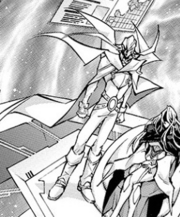 Ren is an extremely skillful Turbo Duelist. He is knowledgeable of Duel Runners and their various types. He claims to own several kinds of Duel Runners, picking a model befitting his an opponent's regarding performance for a balanced match. He is easily able to ride at 300 km/h in a complex course while Dueling on a Duel Runner which he considers not among his best.[3] Following his lost against Yugo, Ren considered the youth enough of a rival to use a more advance Duel Runner model.[4]

The character that composes Ren's name literally means "lotus flower", but it also has references to paradise and reincarnation. It can also be related to ''睡蓮'' meaning water lily, the water part can be related to his deck composed of WATER Aura monsters.

In his youth, originating from the distant future, Ren aspired to become a great Turbo Duelist like his ancestor Yugo, who his father called a legendary Turbo Dueling genius. But while Ren had the drive, he lacked the resources to achieve his dream. But Ren's life changed the day he received the opportunity to participate in the Memorial Race amongst various Turbo Duelists. When Ren learned his ailing father overworked himself to buy him a Duel Runner, he sought to win to honor his father's sacrifice and achieve his dream. But accident occurred that caused Ren to crash and begin dying from his injuries, though his will to survive was answered by Genesis Omega Dragon as it restored him to life and allowed him to repeat the duel and win. He was then approached by Eve who told him that G.O.D. has chosen him. Ren eventually reached the top of something called the Continental Circus during his dueling career. Sixty years later, spending his final days in a lavish mansion, Ren is approached by Eve who recruits him to repay his debt to G.O.D. Motivated to honor his end of the deal, Ren regained his youth while removed by the causality of time as he agreed to aid Eve in her cause.[5]

Present as Eve's side when their observe the Duel between their sleeper agent Sora Shiunin's and Yuya Sakaki, he acts on Eve's orders to retrieve Sora. Ren travels through dimensional corridor to save the boy from being consumed in the explosion he caused. Ren then carries out Eve's other order to search through Yuya's memories for confirmation that he possesses the Adam Factor, hacking into Yuya's computer system and transferring himself to the unconscious youth's Duel Disk. Yuya's counterparts noticed but failed to stop him in time, with Yugo offering to deal with the intruder himself.[6] He shocks Yugo further by knowing of Yusho Sakaki, Leo Akaba, and the "World Illusion" event. Only telling Yugo his name, Ren offers to answer more if the youth can beat him in a Turbo Duel.[7] Though Yugo eventually won, Ren got the confirmation he was looking for and quickly leaves Yuya's body as Yugo and his counterparts got their hands full with the resurging memories caused by the duel.[8]

Ren later watched Yuya's duel with Reiji Akaba, whom Eve suspects to also possess the Adam Factor.[9] When Reiji reveals to Yuya that they are being watched, Ren appears and reveals Genesis Omega Dragon is in Eve's custody and that he intends to take the Adam Factor from Yuya and Reiji by force if needed. But the area the two youths were dueling in began to cave in, forcing Ren to fall back.[10]

Two weeks of failed searching later, Ren finally pin-points Yuya's location and ends up learning that he was being called out by the youth. Though Yugo momentarily subverts Yuya to settle things with him, overpowered the former with his White Aura Biphamet with the latter realizing he needs to figure out Ren's monster to beat him.[11][12] Explaining to Yuya that he will learn trials before him, Ren tells the youth his past life story before removing his mask and reveals his relation to Yugo. It is only a couple of turns later that Ren loses to Yuya when he figures out the mystery of White Aura Biphamet and completely destroys it. The force of the attack knocks Ren off his Duel Runner, his body becoming beginning to dissolve as consequence of being altered into an ageless being by the G.O.D. card. Before falling back, Ren reveals the true nature of the Adam Factor to Yuya while musing if his will can resist the G.O.D. card's influence.[13]

Ren uses a "White" Deck, using complex tactics to gather Synchro Materials to Synchro Summon while distracting the opponent. Ren claims that the use of complex tactics is a basic Turbo Duel strategy, since the more distracted and worked up the opponent gets, the more mistakes they commit.

The main feature of Ren's monsters is the ability to Special Summon themselves back as Tuner monsters when they are destroyed, which Ren calls "Reincarnation Synchro". This allows him to keep Summoning stronger Synchro Monsters as his monsters are defeated.