Yuzu Hiiragi is a main character appearing in the Yu-Gi-Oh! ARC-V manga. She is the heir of the Syu Zo Duel School.

Yuzu has blue eyes and dark pink midback-length hair, which she wears tied up in pigtails, clipped down by blue, spherical hair clips. Her hair also features two lighter pink bangs that fall to the side of her face. Yuzu's outfit consists of a sleeveless light-blue and white shirt with a musical note on the right collar, along with a red tie, which she wears with a dark red skirt and dark stockings. Unlike her anime and special chapter counterpart she doesn't wears her signature bracelet. During her and Yuto's infiltration of the Leo Corporation she wears a pants suit and spectacles.

Yuzu's name is derived from yuzu, a citrus fruit and plant originating in East Asia.

As opposed to her anime counterpart, Yuzu is less mature, making her more persistent and somewhat childish in her own way. Her school's financial crisis makes her a gold digger, taking any opportunity to get money to the point of being reckless. This also make her quite stingy as she refused to give payment accordingly to others while she demands herself to be given a high payment. Once she set her mind on something, she is prepared to use tricks to ensure that she get what she wants. She experiences a slight inferiority complex when it comes to sex appeal, as shown when she was irritated at body figure of "Enter-Mate Uni" and "Enter-Mate Corn". In addition to this, she's easily smitten to any handsome guys, usually reacting like a fangirl whenever she sees one such as when Yuya summoned "Enter-Mate Handsome Liger". 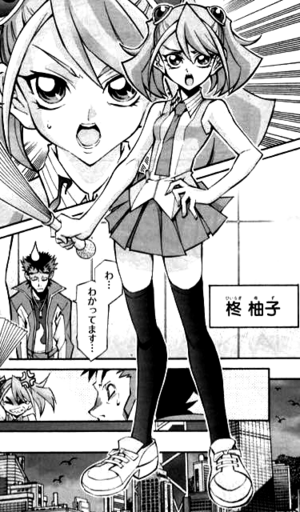 Full-body view of Yuzu in the official manga.

Yuzu is the daughter of Syuzo Hiiragi and heir to the Syu Zo Duel School. Because there are currently no students at all, the school has been in deficit and struggling financially. When alerted to the mysterious Entertainment Duelist, "Phantom", by Leo Corporation helicopters, she planned to recruit him to her school in order to attract students.[1] She later watched Yuto Dueling Shingo Sawatari and she tried to call to "Phantom", but nobody heard her and she ended up falling from the building. When she witnesses Yuto turning into Yuya, Yuzu was both shocked and impressed. She used that moment to dupe Yuya to sign a teaching contract under the guise of an autograph.[2] After Yuya defeated Shingo, Yuzu stowaway on the Solid Vision paper plane he manifested which crashed into the bay due to their combined weight.

When Yuzu came to, she finds herself in Yuya's hideout and learns of his mission to find the Duel Monsters card known as Genesis Omega Dragon. It was then that Yuzu revealed her trick on Yuya to teach at the Syu Zo Duel School, getting into a banter with Yuzu over payment as his manager while offering to help him find the G.O.D. card. Soon after, via a video uploaded on an underground website, Yuzu is mortified to find Syuzo easily defeated by Shun Kurosaki who took her father hostage to force Yuya to duel him. During the duel, Yuzu attempt to get her father down from the top of the tree he was tied to. But when the two nearly got killed when the tree was knocked down by the fight, Shun pauses it long enough to grudgingly save them. Following Yuya's win, Yuzu and her father shamelessly promote their school before he spirited them off in a smokescreen out of embarrassment.

Soon after learning more of Yuya, his three alternate personalities, and the significance of the G.O.D. card, Yuzu decides to move in with Yuya to both his dismay and her father's. The next day, Yuzu helps Yuya and Yuto infiltrate the Physical Information Company in what turned out to be a trap set by Sora Shiunin. During the duel, having felt slightly annoyed by the female Performapal monsters Yuya summoned in earlier duels, Yuzu was smitten with the handsome-looking "Performapal Handsome Liger" while meeting Yuri. Soon after the duel ends, Yuzu meets Yugo as he takes over Yuya's body to take him back to the hold out. 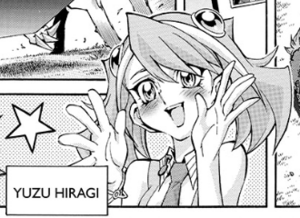 Yuzu in the special manga chapter.

Yuzu has made an appearance in the special manga chapter. She is seen several times cheering Yuya in his Action Duel against Reiji.[3]

Yuzu is often annoyed by her father's goofy nature, which causes her to beat him with her paper fan. But as father and daughter, they care for each other and that motivates Yuzu to do everything within her power to keep their Dueling School from closing down.

Yuzu is the first person Yuya met since arriving to her timeline who was not with Leo Corp and became one of Yuya's closest friends despite tricking him into signing a teaching contract at her father's school. But after terms of payment as Yuya's manager, Yuzu offered to help him in his search for the G.O.D card before learning as much of the significance as Yuya remembered. Yuzu is overall supportive of Yuya and his counterparts, having originally assumed "Yuto" as some sort of comedy act and then a medical condition.

Yuto has shown to be protective of Yuzu, scolding Yuya for getting her and her father caught up in their troubles. When he and Yuzu infiltrated the Physical Information System Company, feeling uncomfortable in his guise an employee, Yuto got a confidence boost from Yuzu commenting on how well he look in his disguise. But Yuto admits to Yugo and Yuri that Yuzu vaguely resembles someone from their past.

As one of Yuya's friends, Yuzu was considered by Yugo as a friend out of consequence. After first meeting her, Yugo confined to Yuto and Yuri that Yuzu vaguely resembles someone from their past

Having noted Yuzu's fondness for handsome guys, Yuri makes an assumption that he might be her type to the point of flirting with her to Yuya's dismay.

Yuzu first met Shun during the Mental Arithmetic Tournament, ending up in second place while the latter got first. When Yuzu was outed as an accomplice by Shin, he kidnapped her father to force Yuya to duel him. During the duel, Yuzu nearly got herself and her father killed when Shun paused the duel long enough to save them though more annoyed over them interrupting his match.