Yuto (ユート Yūto, also written as in "The Power of Bonds!") is a secondary protagonist in the Yu-Gi-Oh! ARC-V manga. He shares a body with Yuya Sakaki, Yugo, and Yuri due to currently unknown circumstances. He is able to communicate with him mentally or simply switch who is in control.

Yuto and Yuzu in their business suits.

Yuto's physical appearance is similar to his anime counterpart: His face semi-identical to his counterparts save his black upward sweep hair with light purple fringes, wearing a punk-style student uniform. Whenever he possesses Yuya or briefly emerges from him as a spirit, Yuto is wearing Yuya's gold and red lined white school jacket. When they originally arrived in Maiami City, since Leo Corp was only after Yuya at the time, Yuto used the hood of Yuya's jacket with his googles and military mask to conceal his face. Yuto wears a cloak like his anime counterpart, but it is not torn unlike in the anime.

While he and Yuzu infiltrated the LC-owned Physical Information Company, Yuto wore a suit and spectacles.

Yuto' personality is much the same as his anime counterpart. He is a more serious and cautious person, contrasting with Yuya, and he often argues with him for his reckless actions. He also has a tendency to point out the odd traits of those he and Yuya face, calling Sawatari a "weirdo", saying he doubts Shun has many friends, and questioning Reiji for analyzing him mid-duel. He seems not to actively seek out duels, only fighting when he deems it necessary. He is not above appreciating compliments however; Yuya complimenting Yuto on wearing a suit fed his ego and pacified his worrying to a degree. Unlike the original Yuto, this Yuto refers to himself as "私" (Watashi).

In the anime, Yūto's name in romaji is written as "Ute", which is pronounced as "Yūto" in Japanese. Yūto has many definitions depending on the kanji used. For example: 優 (Yū) means "Gentleness" and "Superiority", 悠 (Yū) means "Distant" and "Leisurely". The last syllable 人 (To) means person, 翔 (To) means to "Soar" or "Fly". For this character, his name is written in Katakana, so it has no actual meaning. 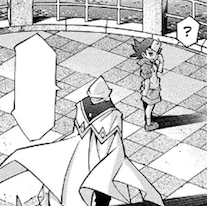 Following their hacking of Leo Corp's mainframe in an attempt to find out info on Genesis Omega Dragon, Yuto takes control of their body in an attempt to lie low. But when Yuto becomes across a crying child who is upset of missing a dragon Duel Monster realized through Solid Vision during a Leo Corporation Tournament, Yuya proceeds to cheer the boy up by summoning his "Odd-Eyes Phantom Dragon" with Yuto upset that now they are exposed. When Shingo Sawatari confronts them, expecting to see Yuya as he demand his surrender, Yuto attempts to misdirect him and the others.[1] But the misdirect attempt while accepting Shingo's challenge back fires when Reiji Akiba gives his subordinate orders to capture Yuto as Yuya's accomplice. Though Yuto did well at first with his "Dark Rebellion XYZ Dragon", he is quickly overwhelmed when Shingo brought out his "Erebus the Underworld Monarch" and dwindled Yuto's Life Points to 200. It was then that Yuya, deeming his counterpart's Xyz deck is ineffective against Shingo's, convinces Yuto to let him take over their body and quickly finish the match. Yuto reluctantly agrees, with everyone present witnessing him transform into Yuya.[2]

Following Yuya being tricked into signing a teaching contract by Yuzu Hiiragi, a worrisome Yuto watched the duo's comedic banter over Yuzu's managerial payment while commenting that the two have no idea what they each are getting into. Soon after, telling his counterpart that he messed up by getting Yuzu involved in their fight, Yuto was with Yuya in spirit as the latter duels Shun Kurosaki who took the girl's father hostage.[3] Yuto attempts to instruct Yuya in the best course to duel Shun, noting how monstrous he appears upon hearing his ideology on dueling, only for Yuya to throw caution to win.[4] Following their win, dismissing Yuya's consideration of befriending him, Yuto scolds his counterpart over using his smokescreen in a matter unfit of a Dueltainer to stop the Hiiragis' embarrassing promotion of their Syu Zo Duel School. When Yuzu and Syuzo notice Yuya appearing to be talking to himself, he comes clean of having three alternative personalities besides his own.[5] It when then that Yuya realized neither Yugo nor Yuri make their presence known, Yuto covering for the two by making Yuya think the two are having a roadtrip in his mind.

The following day, when they get a lead of the G.O.D card's location to be at the Physical Information Company, Yuya and Yuto take Yuzu with them as the latter two disguise themselves as employees with Yuzu commenting Yuto pulling off the look. But once they have infiltrated the building and reach the laboratory where the lead was leaked from, the group realized they fell for a trap set up by Sora Shiun'in. Yuya quickly takes over for Yuto to duel the young Duelist.[6]

Yuto and Yuri discussing about Yuya.

Following Yuya brought back to their hideout after losing consciousness from the punishment he and Yuri endured, Yuto and the other counterparts enter a discussion over Yuya's condition while ending up arguing with Yugo while trying to get him and Yuri to cease their bickering. It was then the three learn of a hacker whom they were unable to stop in time from entering Yuya's mind via his Duel Disk, Yugo offering to deal with the intruder while turning down Yuto's offer of assistance on the grounds of him being "too loud and annoying"[7] While being assured that Yugo is a talented Turbo Duelist, Yuto follows after Yugo alongside Yuri to see the Turbo Duel unfold[8] Once the duel ended, Yuto and Yuri arrive as Yuya's memories surged with Yugo wiping them out. Before taking a rest to recuperate, Yugo informs Yuto and Yuri of Ren and his knowledge of the World Illusion[9]

When Yuya comes to, Yuto and Yuri inform Yuya of what occurred and the possibility of another faction to deal with. Yuya then learns Reiji had found their hideout, having Yuto and Yuri agree to disappear for a bit so he can have a private discussion with Reiji.[10] But when Reiji is adamant to duel Yuya and overpowers him, teasing Yuya over needing them when he needs their help, Yuto quickly return to aid his counterpart as he summons "Dark Anthelion Dragon".[11] Soon after going off the grid, Yuto and his counterparts have Yuya undergo a training regime to hone their dueling skills before learning from Yugo and Yuri of the apparent side effect that the Adam Factor poses to their link with Yuya.[12]

Yuto and Yuya's differing personalities and stark experiences, combined with their similar ideals, make them each other's foils. Their history prior to sharing a body is unknown at the time save the two knew each other. At times, Yuto would tend to scold Yuya whenever he does something that puts them at risk like cheering up a kid while they are being hunted down by Leo Corp agents. But Yuto tends to keep some secrets from Yuya where his memories are concerned, including their counterparts' activities or Yuzu resembling someone they knew from their time.

Like with Yuya, Yuto tends to treat Yugo and Yuri as little brothers much to the former's distaste as Yugo sees Yuto as "too loud and annoying".

Yuzu is the first person Yuto met since arriving to her timeline who was not with Leo Corp and became one of Yuya's closest friends, though she assumed he was some sort of comedy act Yuya made up. He also protective of Yuzu, scolding Yuya for getting her and her father caught up in their troubles. When he and Yuzu infiltrated the Physical Information System Company, feeling uncomfortable in his guise as an employee, Yuto got a confidence boost from Yuzu commenting on how well he look in his disguise. But Yuto admits to Yugo and Yuri that Yuzu vaguely resembles someone from their past.

Before physically meeting, Reiji was the one who realized Yuto's presence during the hunt for Yuya was no coincidence and gave Shingo orders to capture him.

Yuto first met Shingo when he was forcefully took control of Yuya's body in an attempt to misdirect Shingo while challenging him to a duel. But Reiji gave Shingo orders to capture Yuto as a possible accomplice to Yuya, allowing Shingo to overwhelm Yuto until Yuya was allowed to use his body again to finish the duel in their favor. 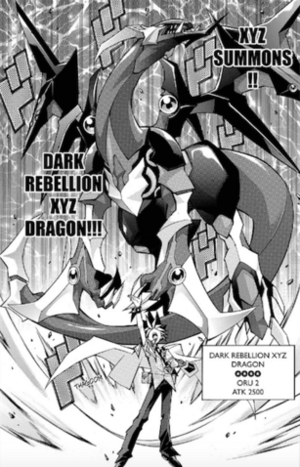 Like other of his personas, his deck in influenced by Yuya and their deck influenced him too, with Yuto having cards such as "Pendulum XYZ", and with his "Dark Anthelion Dragon" evolving to a Pendulum Monster.