From Yugipedia
Jump to: navigation, search
This article is about the type of Dueling in Yu-Gi-Oh! ARC-V. For the Duel Terminal option, see Action Duel (Duel Terminal).

Duelists locked in battle! Kicking the earth and dancing in the air alongside their monsters! They storm through this field! Behold! This is the newest and greatest evolution of Dueling! ACTION DUEL!

— The standard chant in the original Japanese raw recited before an Action Duel begins.

An Action Duel is a type of Duel in the Yu-Gi-Oh! ARC-V series. 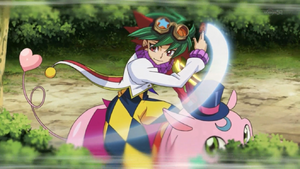 An Action Duel occurs with the help of tangible Solid Vision. This Solid Vision surround the entire field and the Duel takes place in the entire area.[1] Unlike previous Yu-Gi-Oh! series, the monsters Summoned during these Duels are real enough to let Duelists interact with them, as seen when Yuya rode on "Performapal Hip Hippo".

In an Action Duel, a Field Spell Card commonly referred to as an Action Field, is activated before the Duel starts, modifying the terrain to look similar to card's artwork. Action Cards are then scattered throughout the field, which either Duelist can search for to aid them. When an Action Card that is a Spell Card is found, it is placed in the hand and can be used right away as if it was a Quick-Play Spell Card. However, when an Action Card that is a Trap Card is found, it activates right away. When a card is activated, a player can use the Action Cards they found to pay the cost if necessary, as shown when Yuya played "Wonder Balloons" and discarded the Action Cards he found to pay its cost. However, to discourage Duelists from simply hoarding Action Cards, a player may only hold on to one Action Card at a time.[2]

Action Fields are specifically created for Action Duels, as such they do not have any effect other than allowing Action Cards for use for both players, however there are differences amongst each Action Field. As previously mentioned, they will each materialize a setting unique to each Action Field, providing unique and differing obstacles each, including some potential hazards of their own. Furthermore the Action Cards available vary with each Action Field, some being unique to specific Action Fields. The distribution of the Action Cards is also not random as it looks at first glance. They are spread in pre-set locations and sometimes will appear at a programmed time. This is seen best with Yuya, Dipper, and Pierre L'Supérieure, who each have a preferred Action Field they specialize on, as they have been perfectly capable of memorizing their layouts and gimmicks.

Field Spell Cards may still be activated during Action Duels and their effects are applied in addition to those of the pre-set Action Field.[3] When this happens the terrain is overwritten to match that of the new Field Spell. Pre-existing Field Spells in the Arc-V setting have an erratum change which adds the following line "You can use Action Cards, but you can only have 1 Action Card in your hand." which as described above is commonly found in Action Fields.

Similar to Turbo Duel rules, a Duelist, and in this case the monster, can evade attacks as the Duelist has until the attack connects to respond with an effect and can continue to search for an Action Card to play. This adds an additional dimension to Duels where a Duelist can use the environment to evade while discovering Action Cards they find to respond with. If a Duelist takes too long between playing cards, such as spending too much time looking for Action Cards, they are penalized with an automatic forfeit. The time limit is roughly around 2-3 minutes.[4]

Born from the discovery of implementing mass into Solid Vision, Action Duels! Duels where the field, monsters and Duelists' become one, pulls the crowd into the maelstrom of crazed excitement!

— The phrase recited before the first Japanese opening themes for the Yu-Gi-Oh! ARC-V anime. 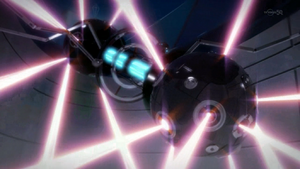 The device which creates the "Solid Vision with mass".

Action Duels started when the Leo Corporation invented "Solid Vision with mass". It started in Paradise City and is now popular throughout the world.[5] The Solid Vision with mass is created by a huge device located under the Duel field, which seems to be operated by a person from a control panel. When the Field Spell Card is activated, the device produces several beams of light, which creates the Solid Visions.[2] LID was later able to create a portable version of this technology and modify the Lancers' Duel Disks to allow them to reproduce Action Fields and Action Cards using their Duel Disks.[6] If the Solid Vision Machine is shut down during an Action Duel, whether it is due to a malfunction or shut down manually, the Duel is cancelled and no winner is declared.[2][7]

Similar to Shadow Duels, due to the fact that all the scenery, monsters, and effects are solid constructs, there is a real danger of Duelists getting harmed in some way. Ceiling fixtures are subject to falling due to their heavy weight and buildings collapse when structurally compromised, potentially resulting in injuries if one were under said structures [8], albeit as seen in the case of Sora Perse, it seems this damage is somewhat mitigated as despite having a building crashland on him, he had relatively minor injuries [9] There is even a risk that falling from a high enough distance will cause injury.[10] Monster attacks and damaging effects have enough physical force to at least knock a person a considerable distance backwards. In the Japanese version, it has even been hinted at that death is a very real possibility in an Action Duel, such as when Zuzu almost fell into the lava in the Battle Royale but was saved by Dennis.

Furthermore, physical interaction with the opponent while unusual and questionable, is permitted, as seen in the Duel between Iggy Arlo and Kit Blade, with the former, physically assaulting the latter for the entire Duel, arguably causing the loss, but with seemingly no consequences for Iggy, while Kit had to be attended by a medical team after the Duel.[11]

However, there are different settings of solidity for Action Duel stage. During the Arc League Championship Junior Division, a much softer and bouncier setting is used to ensure that no harm is inflicted on the children Dueling.[12]

Thanks to the three-dimensional aspects of the field and monsters, as well as the presence of Action Cards, various Duel Schools have created different styles of Action Dueling. These different styles combine the Duelist's own carefully crafted Deck, with various advantages of the field and Action Cards, though some of these styles are shown to be more suited a specific type of field.

So far the known type of Duel styles are: 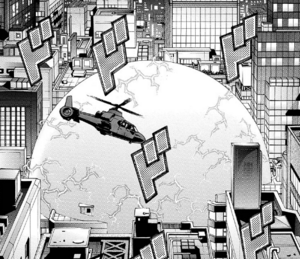 In the manga, the Action Fields are created inside a solid sphere.

Action Duels are present in the Yu-Gi-Oh! ARC-V manga as well. However, the format's depiction in the manga features differences from the anime.