From Yugipedia
Jump to: navigation, search
For the Tag Force version of this character, see Grizzlepike Jones (Tag Force).

Grizzlepike Jones, known as Gen Ankokuji ( ゲン, Ankokuji Gen) in the Japanese version, is a participant in the Junior Class of the Arc League Championship in the Yu-Gi-Oh! ARC-V anime. He is also a fan of the Sledgehammer and derides Yusho Sakaki for running away and not facing the Sledgehammer for the title of the Champion. Because of this, he has bullied Yuya Sakaki during some occasions. He is a former member of the Strong Dojo and knows Gong. 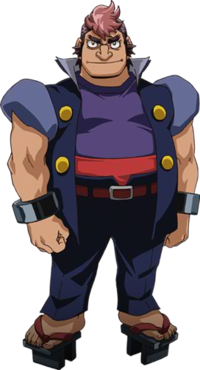 Grizzlepike is a tall and muscular young man with a build comparable to that of Gong. He wears a pair of blue pants and what appears to be a red sash on his abdomen, with a purple shirt with thick pauldrons along with a blue jacket. Notably he also wears a pair of steel bracers and sandals.

Grizzlepike is a devoted follower of the Sledgehammer, so much that when a distraught Yuya Sakaki offered to fight the Sledgehammer, Grizzlepike offered to take Sledgehammer's place to face Yuya. He is malicious and believes only in strength, having seemingly no moral or ethical concepts of sportsmanship as demonstrated by the way he bullied and humiliated Yuya and left the Strong Dojo because their discipline conflicted with his beliefs of winning at all costs. He desires to win so much that he uses underhanded means to disrupt his opponent's plays and break their spirit. Grizzlepike seems to be a misanthropist at heart, as he believes that people betray one another and that there is nothing worth believing in the world, a philosophy that is reflected in his Deck's strategy.

Perhaps the only positive trait about Grizzlepike, is that he studies and prepares for his Duels accordingly, as he researched that Gong used Synchro Summoning to win his Duels and prepared a countermeasure. 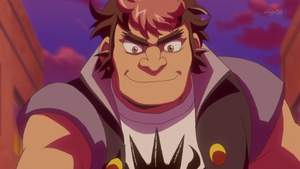 Grizzlepike was a student of the Strong Dojo, where he learned the Steadfast Dueling style. After Yuya Sakaki vowed to Duel The Sledgehammer in the place of his father Yusho, Grizzlepike confronted him in the street one day and offered to Duel Yuya in place of the Sledgehammer. He accused Yuya of being scared, but Gong broke up the argument, warning Grizzlepike that his actions wouldn't be tolerated even if Grizzlepike was his senior. Grizzlepike eventually left the Dojo of his own accord, in an exit that was described as disgraceful.[2][3]

Remaining unattached to any Duel School, Grizzlepike qualified for the Junior Arc League Championship Division with six straight wins. On the opening day of the tournament, he bumped into Yuya Sakaki again, who had beaten the Sledgehammer not long ago. Grizzlepike expressed his disbelief that a weakling like Yuya could defeat the Sledgehammer. Before their argument could progress any further, Gong intervened, and Grizzlepike walked off, vowing to defeat them. He was set up to Duel Gong the next day.[3]

The next day, well aware that Gong would be given a new sash to wear for the match, Grizzlepike arranged for four of his friends to steal his previous sash and lure Yuya away. He planned for the implications of Yuya's fate to cause Gong to panic and his Dueling to be affected. Before the Duel he sarcastically complimented Gong's new sash, and when they Dueled in "Solitary Island in a Faraway Sea", he commented that Yuya was in a forest too before explaining what he'd done. Gong refused to surrender, and brought out his "Superheavy Samurai Big Benkei," but when he Summoned a Tuner monster, Grizzlepike took control of it, well aware that Gong could Synchro Summon, likening its betrayal to how Yuya must be feeling. Zuzu Boyle, who had gotten in contact with Yuya, managed to snap Gong out of his panic. Gong vowed to follow his Dueling ways, and Grizzlepike claimed that his Steadfast spirit would be worthless. He used "Shaman Battleguard" to take control of "Big Benkei" and brought Gong down to 500 Life Points, but Gong was able to survive, learn that Yuya was safe, and bring out another Tuner monster that used "Big Benkei" to Synchro Summon "Superheavy Samurai Warlord Susanowo." "Susanowo" gained enough DEF to the point that it could, like "Big Benkei", attack with its DEF and wipe Grizzlepike out in one hit.[1]

After Z-ARC's defeat and the rebirth of the Standard Dimension into the "Pendulum Dimension", Grizzlespike is seen watching Yuya's Duel against Jack Atlas.[4] He applauded when Yuya won and watched Yuya and Declan Akaba's Action Duel.[5] Despite his dislike for Yuya, he applauded when he defeated Declan, and he witnessed Zuzu Boyle's revival.[6]