Sam is a character who appears in the Yu-Gi-Oh! ARC-V anime. He is a Common who works for the Topsiders at events.

He is very reluctant to look others in the eye or give his own opinion. Sam previously admired Jack Atlas, but after he misinterpreted Jack's gift of the "Tuning Magician" card he developed a fierce hatred for him and the Tops.

Sam was employed by Sector Security and the High Council of the Synchro Dimension. However, he refused to make eye contact with his peers or give his opinion. On one occasion, he met Jack Atlas at an event and he explained that he was a fan of his. Jack gave him a card, "Tuning Magician", which he explained suited Sam. Sam interpreted this as an insult, given the card's low Level, 0 ATK, and its effect.[2]

When Yuya tried to talk to Sam about Jack Atlas before the exhibition match of the Friendship Cup, he was nervous and didn't realize Yuya was talking to him despite being the only other one in the room.[1] After Yuya's defeat, he gave Yuya "Tuning Magician", believing the latter could defeat Jack.[2]. Sam was later present during Yuya's discussion with Declan regarding Riley.[3] 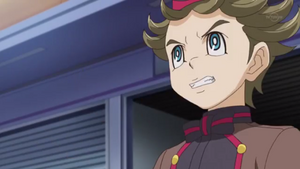 Sam watched the Duel between Yuya and Shinji. He was surprised to see Yuya use the card he gave him, "Tuning Magician", to Synchro Summon "Enlightenment Paladin" and win the Duel with it.[4] Although he was overjoyed when Yuya won, he was shocked when Shinji and the Commons painted Yuya as an ally of the Topsiders and he started to distrust Yuya, especially due to the untimely arrival of Jean Michel Roget.[5]

Before the semifinals match, Sam talked to Jack about how he finally understood why Jack gave him "Tuning Magician". He also learned from Jack that all cards and people had a purpose and was given the task of delivering this message to Yuya.[6] Sam went to look for Yuya to tell him that Jack was not impressed with his Duel with Crow. Jack also instructed Sam to tell Yuya, if that wasn't the Duel he truly believed in, to come to the Duel Palace and challenge him to a Duel. He then returned to the Duel Palace with Yuya, Gong, Frank, Amanda, and Tarren, but they couldn't get in due to the Commons blocking the entrance during their riot. Just then Shay, Chojiro, Sylvio, Declan, and Riley appeared while riding Shay's "Raidraptors". They rode on with them to the Duel Palace, where Yuya challenged Jack Atlas to a Duel.[7]