Rin (リン Rin) is a character in the Yu-Gi-Oh! ARC-V anime. She is a reincarnation of Ray Akaba, as well as a dimensional counterpart of Zuzu Boyle (Standard Dimension), Celina (Fusion Dimension) and Lulu Obsidian (Xyz Dimension). She is also Yugo's childhood friend.

Rin is a Turbo Duelist who resides as a Common in New Domino City in the Synchro Dimension. Rin and Yugo planned to enter the Friendship Cup, but she was abducted by Yuri before the tournament. According to Leo Akaba, Rin is crucial to his plans.[2]

Her physical body perishes when she rejoined to form Ray Akaba, with her spirit ultimately living on in Zuzu Boyle.

Rin in her Turbo Duel suit, pajamas, and jumpsuit.

Rin is the only one of Zuzu's dimensional counterparts whose hair is not colored in a shade of purple. She has shoulder-length aqua-green colored hair in a style vaguely similar to Yuri's with a lock of hair sticking up over the head like Yuya's. Rin's hair also has two light green sidetails in a similar style to her counterparts, and she also has orange eyes. She is fair skinned. Her jewelry consists of a pair of blue studded earrings and a black choker with a blue jewel. Rin's outfit consists of a blue and white jacket with pink pads on the shoulders and elbows, pink shorts, and white and pink boots that reach up to her thighs with pink kneepads. Like her counterparts, she also wears a bracelet.

During some flashbacks, Rin is seen wearing nightwear that her counterpart Zuzu Boyle later wears; a pale pink singlet and yellow shorts, while she is also seen wearing the Turbo Dueling outfit that Zuzu borrowed during a fantasy of Yugo's; a predominantly white one-piece short-sleeved jacket-miniskirt combination with light pink shoulder pads and hot pink markings, in addition to back pockets; long white gloves with light pink elbow pads that extend over her elbows, hot pink pants, and white knee-length form-fitting boots with light pink kneepads. She wore a red mechanic jumpsuit while building the Duel Runner.

Rin is a headstrong girl, similar to Zuzu, involved in Turbo Dueling and riding on her monsters during those Duels. According to Yugo, Rin is ruthless when she Duels, being capable of cornering him in one of their Duels. She has a slight tsundere nature akin to Zuzu and Celina, as she kicked Yugo in the stomach after he reached her in the tower, despite the fact that he came to rescue her and they were reuniting after quite a time apart from each other.

While she was under the control of a Parasite Monster, Rin is dark and vicious. She gives little relevance to anything that was precious to her and Yugo and belittles them both as insignificant and goes as far as ridicule them as "stupid things". She also cruelly assaults Yugo with little restraint and even shows glee while doing so. She goes as far as pushing Yugo out of a window and shows little to no care for destroying the Duel Runner they built together. Under this state she is completely loyal to the Professor and has little care for anything else. 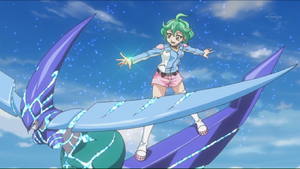 Rin is shown to be able to ride on her monsters with ease, as shown with "Windwitch - Winter Bell" and "Windwitch - Crystal Bell".[3][4]

Rin's name can mean "dignified", "severe", "cold", or "bell." "Cold" and "bell" are the best depiction of her deck, "Windwitch", in which, monster names follow this style: "{low-temperature-related word} bell."

Rin is the only one out of Zuzu's dimensional counterparts who retains her Japanese name in the dub. In English, the name Rin can also be a shortened form of several names but notably Rina which means "song and joy", tying her with musical theme of her deck and her other counterparts, and Renée which means "rebirth", possibly notes to the fact that she and Yugo are both reincarnations of Z-ARC and Ray. 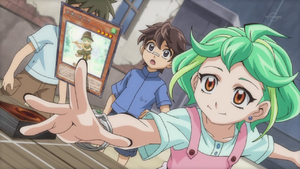 Young Rin with her bracelet. 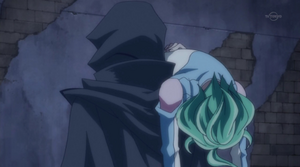 Rin being abducted by Yuri.

Rin is Yugo's childhood friend who grew up with him as orphans and lived in a slum area of New Domino City in the Commons. Seeing Jack Atlas rising from the Commons to the Topsiders, Yugo and Rin honed their skills in order to do the same. They built a Duel Runner together from scratch in order to achieve their goal. At one point after the Xyz Dimension invasion, she was kidnapped by Yuri.[1] Shortly after her capture, Rin was brainwashed by The Doktor.

During the Battle Royal portion of the Arc League Championship, Yuri mentioned that Zuzu greatly resembles Lulu and Rin. Yugo then saw Zuzu in the Glacier field and mistook her for Rin, hugging her.[5]

After arriving in the Synchro Dimension, Yugo mentioned Rin after realizing Zuzu wasn't her because Rin never got his name wrong.[1]

During Yugo's Duel against Celina, he was confused by Celina's resemblance to her, and he imagined Rin and him Dueling in the Friendship Cup. Even after Celina stated that she wasn't Rin,[6] Yugo confused her for Rin after their Duel.[7] When Yugo ran into Yuri again he demanded Rin's location; Yuri, in turn, asked about Zuzu's whereabouts. Yugo replied that Zuzu was in his heart. Yuri, annoyed at this, replied that Rin was there, too and activated "Violet Flash" to flee from Yugo again.[8] 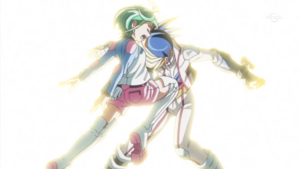 Rin knees Yugo in annoyance. (Cut from the dub)

After Kite Tenjo defeated Dennis McField he then revealed to Kite that Rin was held captive in the Eastern Tower of Duel Academy.[9] After Yugo defeated Apollo, Yugo broke into her room. As Yugo was running toward her, she kneed Yugo in the stomach and angrily scolded him for being late for her rescue. Nevertheless, Rin hugged Yugo, glad to be reunited with him, but while she hugged him, she smiled evilly.[10]

As Yugo talked about his participation in the Friendship Cup, Rin cut him off and challenged him to a Duel. She pushed him out the window, causing him to crash on to his Duel Runner. She told him to ignore it and insisted they Duel, even when he explained how they built the Duel Runner together. Rin brought out two "Windwitch - Ice Bell", using their effects to damage Yugo and Synchro Summoned "Windwitch - Winter Bell". She then used the effect of "Winter Bell" to copy the effect of "Ice Bell", bringing Yugo's LP down a third time. She then jumped on "Winter Bell" going down the steps with Yugo following her. Yugo brought out "Clear Wing Synchro Dragon" to make her remember, but she used "Lost Wind" to negate the effects of "Clear Wing" and halve its ATK. During her next turn, Rin Special Summoned "Fusion Parasite" and fused it with "Winter Bell" to Fusion Summon "Windwitch - Crystal Bell". She also used the effect of "Fusion Parasite" to equip it to "Crystal Bell" to protect it. Rin destroyed "Clear Wing", causing Yugo to crash into the ground and destroyed their Duel Runner to his shock. Rin ordered him to stand up, and she told Yugo to surrender as his LP was close to 0 and his Duel Runner being destroyed.[3] 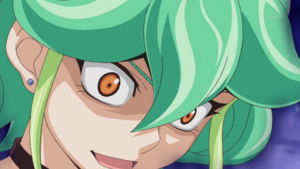 Rin activates the effect of "Crystal Bell" showing that she had not returned to her senses. 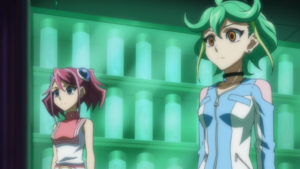 Later, Rin watched Yuya Sakaki and Yuto Dueling Lulu and Celina with the Doktor and a now brainwashed Zuzu Boyle.[11] Celina and Lulu were defeated and they returned to the Doktor's lab with Yuya in pursuit. Yuya was caged in the lab, and Rin left with her counterparts and the Doktor.[12] 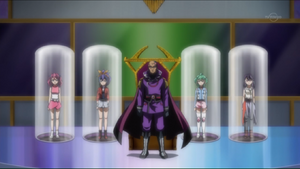 Rin and her counterparts in tubes behind the Professor.

Rin and her counterparts' capsules started to move next to the ARC-V Reactor. Rin was surprised when Declan Akaba Synchro Summoned, but Celina told her that Declan wasn't finished yet, and she watched in shock as he Fusion and Xyz Summoned as well in one turn. Rin became worried when her capsule started to glow, and surprised when Leo revealed that Z-ARC was the demon dwelling inside Yuya after he entered an Awakened state. When Yuya used the second effect of "Performapal Gatling Ghoul", Rin noted that if the effect succeeded, Yuya would win.[13] 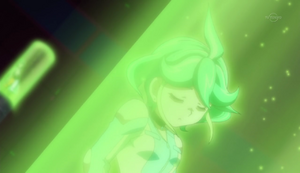 Rin faints as the ARC-V Reactor continues to power up. 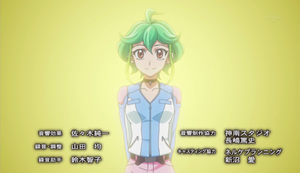 Following the battle with Z-ARC, Rin's fate was unknown but Declan theorized that she was most likely still inside the remnants of the ARC-V Reactor.[18] Leo managed to collect what appeared to be Ray's spirit, though he was unsure that it was Ray and he theorized that Ray's fragments would eventually revive as Zuzu.[19] After Yuya defeated Declan, Rin's spirit revived within Zuzu when Ray reacted to their Duel.[20] 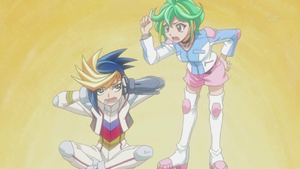 Yugo is Rin's childhood friend. They met at a young age in an orphan facility where they were raised together and became best friends. The two of them were inseparable as all they've had were each other. According to Yugo, Rin acts like a motherly figure to him. She often reprimands him for doing things he shouldn't have been doing or whenever he says or does something wrong and would tell him to think before he talks. In the English dub, Yugo mentions she would say his mouth needed a speed bump and tell him to "think about it before you speak about it." According to Yugo, Rin would scold him like a mother would to her child and could be a real nag. Nevertheless, she is very close with Yugo since they had grown up together. She is shown to be fairly supportive of him as the two have ventured together in every one of their adventures, from building their Duel Runner from scratch (despite going by Yugo's ridicules design plans and having little money) as well as participating in Dueling events.

They had their share of quarrels, but they would always settle their disputes with a Duel. Yugo has shown that he may see Rin as possibly more than just his best friend such as when he blushed and stammered after Zuzu made the assumption that she was his girlfriend and when he went all hyper drive (with hearts in the background) after imagining her in Celina's place dueling their duel. However, it is not clear if Rin feels the same way.

Yugo and Rin's relationship is also a lot like Yuya and Zuzu's own relationship. Both pairs have been together since they were young, they both aspire to be a great certain type of Duelist (Dueltainer for Yuya & Zuzu and turbo for Yugo & Rin), they are supportive of each other, the guys tend to get reprimanded by the girls for their crazy antics, and there have hints to possible romantic interests between them.