From Yugipedia
Jump to: navigation, search
This article is about the Yu-Gi-Oh! ARC-V character. For the Yu-Gi-Oh! Dungeon Dice Monsters video game character, see Diana (DDM). For the card, see "Diana the Light Spirit".

Diana is a character in the Yu-Gi-Oh! ARC-V anime. She is a servant of the Fusion Dimension's Duel Academy and she is the guardian of the Western Tower where Lulu Obsidian was held.[2] 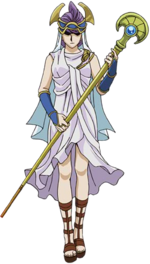 Diana is a lilac-haired pale-skinned woman who dresses in Roman attire. She wears white robes with a golden chain tied at the shoulder, blue armguards, and brown sandals with thick soles, in addition to a golden crown white the shape of a crescent moon on each side with cloth shielding the nape of her neck. Her crown shadows her eyes, and she carries a golden staff with a crescent moon symbols as the head, set with a blue gem.

Diana is named after the Roman goddess of the moon. 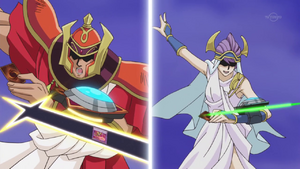 Diana and Apollo activating the same card in their respective Duels.

When Shay Obsidian made it to the tower to rescue Lulu, Diana was still lying unconscious on the ground and Lulu was examining her comatose body.[3]

Diana uses a Deck centered on Fusion Summoning "Penumbral Keeper". Her strategy revolves around creating "Keeper Shield Tokens" through the effects of "Penumbral Keeper" and "Admiration of the Keepers", which prevents "Penumbral Keeper" from being destroyed. With "Admiration of the Keepers" she's capable of nullifying her opponent's ace monsters's effects while forcing them to attack the "Shield Tokens" or they risk getting that monster destroyed, in turn making the opponent's monsters substantially weaker while granting additional benefits for Diana.