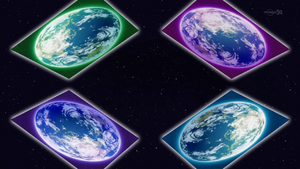 The Synchro Dimension (シンクロ Shinkuro Jigen) is one of the Four Dimensions in the Yu-Gi-Oh! ARC-V anime, where nearly all Duelists use Synchro Monsters.[1] This dimension is where New Domino City, Yugo's homeland, is located. Alternate versions of numerous characters in the Yu-Gi-Oh! 5D's anime such as Jack Atlas, Crow Hogan, Hunter Pace, Rathie, Sayer, Hippies, Don Piero, Dobocle, Lazar, and Dexter also reside in this dimension. Duel Runners and Turbo Duels also exist in this dimension.[2]

Unlike the other dimensions, the Synchro Dimension does not seem to be affected by Duel Academy's invasion and are unaware of the existence of the other dimensions as shown when Zuzu and Yugo tried to give warnings to the residents of New Domino of the possible invasion of Duel Academy and were passed off as weird, with the residents assuming that the information they gave was a hoax. Synchro Dimension was only introduced to Real Solid Vision technology after the arrival of Jean Michel Roget some time after the arrest of Chojiro Tokumatsu. Additionally, most of its inhabitants were unaware of the existence of Fusion, Xyz, and Pendulum Monsters until Celina, Shay Obsidian, Yuya Sakaki, and Dennis McField performed their Summons in the dimension. Double Tuning is also used in this dimension by Jack Atlas. It is implied that this is unique to this dimension as Yuya was unaware of it during his Duel with Jack.