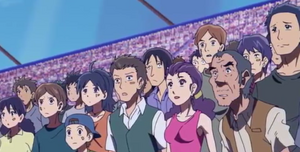 Commons (コモンズ Komonzu) is a term referring to most residents of and area of New Domino City in the Yu-Gi-Oh! ARC-V anime.

According to Yugo, New Domino City's population is divided into two groups, the top 1% of the population which resides in Topsiders, and the remaining 99%, which resides in the slums whom which as referred as Commons. Despite the wide discrimination against Commons, it is possible for a Common to gain acceptance in Topsiders, as this dimension's Jack Atlas as widely known to have risen from the slums after winning the Friendship Cup.[1]