From Yugipedia
Jump to: navigation, search
For the arc the tournament takes place in, see Friendship Cup (arc).

The Friendship Cup is a tournament held in the Synchro Dimension in the Yu-Gi-Oh! ARC-V anime. The tournament made Jack Atlas the current Duel King.[1] It was created to promote harmony between the Topsiders and Commons after the Commons revolted when Chojiro Tokumatsu was arrested.[2]

There is a large amount of controversy regarding the motives of the tournament, due to Jack being perceived as a traitor by many of the Commons, a hero by the other part, and the Tops consider him to be one of them. According to Yugo the purpose of the event is deciding who is worthy of challenging Jack to a Duel. Every year a participant is picked for an exhibition match, which in reality is meant to show the rest Jack's overwhelming strength, so Jack's opponent is called "The King's sacrifice".[3]

There is a horrible conspiracy behind the tournament where losers are taken to an Underground Labor Facility and forced into servitude (though once there they can win their freedom by Dueling).[4] However, the people of New Domino City don't seem to find anything wrong with this as it's "natural" for the defeated to fall.[5]

With Yuya's victory, Topsiders and Commons were abolished.[6] This means that the Friendship Cup has outlived its usage, so it's dubious that it will be held again in the future.

Within the Underground Dueling Arena, defeating 10 people in a row allows one to participate in such tournament.[7] Alternatively, one can also sign up by filling an application sheet, which needs to be approved by Jean Michel Roget[8], though Roget may also invite people he deems worthy himself.[2]

Participants in the Friendship Cup

The match-ups for the second half of the first round. 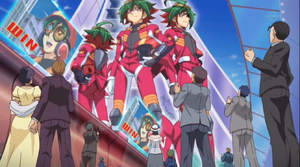 The Friendship Cup is conducted as a 16-player knock-out tournament. The participants are locked in a building owned by the High Council to keep Jean Michel Roget and Sector Security from interfering. Matchups are revealed on the spot, with the chosen Duelists being released at that moment and led to the Duel Palace. The losers, however, are forced to leave the building.

After the Duel between Shay Obsidian and Dennis McField destroyed much of the stadium's Duel Lanes, the tournament was forced to be held in New Domino City proper, with it being broadcasted to the audience in the stadium.[22]