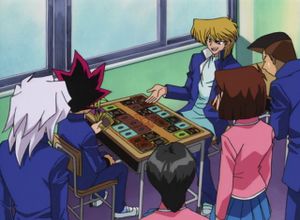 Duel Monsters (デュエル モンスターズ, Dyueru Monsutāzu), originally known as Magic and Wizards (マジックウィザーズ or , Majikku ando Wizāzu), is the card game played in the various Yu-Gi-Oh! manga and anime series. It was created by Maximillion Pegasus, who based the card designs on ancient Egyptian carvings and hieroglyphs.

The Basic rules were used during Death-T and earlier.

The Standard rules contained the basic rules, with some additional ones. These were used during the Japanese National Duel Monsters Championship and the Duelist Kingdom tournament.

The Expert rules were used with the first version Duel Disks. This alters many of the previous rules and adds more.

The Super Expert rules were introduced in the Battle City tournament, as well as the course of Yu-Gi-Oh! GX. They are based on the standard rules, contain additional rules and alter previous ones. The Expert rules do not apply in Super Expert.

The Master Rules are a modified version of the Super Expert rules with some updated terminology used starting with Yu-Gi-Oh! 5D's, and the addition of Tuner and Synchro Monsters for Synchro Summoning.

Other ways of playing Duel Monsters have existed throughout the series, usually using one of the previous sets of rules played under particular circumstances with additional rules added. These include:

The first actual Duel Monsters card game to be released was Yu-Gi-Oh! Bandai's Official Card Game, released by Bandai in September 1998. Only three Booster Packs were released before the license to produce a card game was sold to Konami. This game was never released outside Japan.

The current version of Duel Monsters is Konami's Yu-Gi-Oh! Official Card Game (OCG). This uses far more complex rules which were introduced in later parts of the manga and anime. The Yu-Gi-Oh! Trading Card Game (TCG) is identical in structure and rules to the official card game, but until 2009 it was manufactured by Upper Deck Entertainment under Konami's direction. Both versions mostly contain the same cards, but there have been cards exclusive to the OCG and TCG, and most cards, such as Booster Packs, Starter and Structure Decks, are first released in the OCG.