Thirteen of the secret cards, which Takahashi designed for the game (the missing secret cards are #356: "Super War-lion" and #357: "Yamadron") 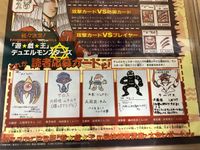 The title screen and main menu

The following options are available at the main menu:

There is also a password menu, which is only accessible by entering a secret code at the main menu.

Duel Monsters is set during the Duelist Kingdom arc of the manga.

The player must defeat each character in a stage five times to advance to the next stage. A character that has been defeated five times can be Dueled additional times for more cards. Defeating Maximillion Pegasus five times causes the ending credits to roll. After that an additional Dark Stage appears, with Yami Yugi as an opponent.

A total of sixteen opponents are featured in Duel Monsters: four in Stage 1, nine in Stage 2, and one each in the last three stages.

Players can battle other players, who have the same game, using the Game Link Cable via the Versus menu. The Deck can be altered before the battle, from this screen.

After a battle, the winner can take one card from the opponent's trunk. After every ten battles, the player is awarded a certain card.

If this option is selected without a second game being connected, Tea Gardner appears and prevents the action.

Players can trade cards with other people who have a copy of the game, via the Game Link Cable.

If this option is selected without a second game being connected, Tea Gardner prevents the action.

The player starts the game with a 40-card Initial Deck which includes 33 Monster Cards, selected randomly from a pool of 100 monsters, as well as seven Magic Cards, which are always the same.[3]

For display purposes, the list of monsters is split into groups of ten. This has no significance in-game, and is only done here for viewing convenience.

When an opponent is defeated, the player is given a card.

Each opponent has a different list of cards the player can get for beating them, with each card on the list having an assigned probability of randomly obtaining it. See Yugi Muto (Duel Monsters 1) § Drops for example.

The player wins a certain card from each opponent after every ten wins against that opponent, up to 100 wins.

The player receives a certain card after every ten battles against different human opponents via the Game Link Cable, up to 200 unique opponents. While fifteen of these cards are also available as drops and victory bonuses, five of them can only be obtained as communication bonuses; these are indicated in the below table with a pink background and a superscript dagger (†) after the card's name.

The card #347: "Tremendous Fire" was notoriously powerful in this game, with the ability to instantly inflict 5000 damage. It is also considered one of the most difficult cards to unlock, requiring to battle 200 different opponents.

Because no official method of erasing a saved game was ever published, players could not easily keep resetting a second copy of the game to face more unique opponents. However, there is a secret method to erase the saved game coded into the game. To achieve this, players can press the following buttons at the title screen: ↓, ↑, B, ↓, ↓, →, ↑, ↑, ↑, ↑, B + ↓. Other non-standard methods of erasing the save file involve directly tampering with the cartridge, which risks damaging it or the console used to play it.

Cards can be traded from other games using the Game Link Cable.

Communication Fusions can be performed by connecting to a second copy of Duel Monsters or to a copy of Duel Monsters II: Dark duel Stories, using the Game Link Cable. This requires the two Fusion Materials and #289: "Change Slime". "Change Slime" has a chance of being included in the Starter Deck; after that, it can only be obtained with a chance of 1/2048 per Duel against certain opponents, or as the first communication bonus after battling against ten different opponents over the Game Link Cable.

Eight different cards are available as Communication Fusions, and none of them can be obtained by any other method in-game, though all of them can be traded back from later games.

#067 "Perfectly Ultimate" requires a total of eight Communication Fusions to obtain, each of which requires a copy of "Change Slime"; it also requires three copies of #278: "Petit Moth", which is only available as Weevil Underwood's 100 victory bonus. Because of this, it is considered to be an extremely difficult card to obtain.

After a communication battle, the winner must take one card from their opponent's trunk. 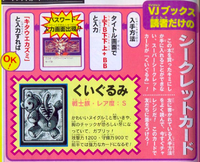 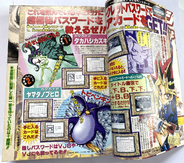 Sources containing passwords and showing how to open the password menu
Left: The guidebook, with the "Stuffed Animal" password
Right: Page of Weekly Shōnen Jump 1999 #9 issue, with the "Fairy's Gift" and "Flying Penguin" passwords

To access the password entry, the following button sequence must be entered on the main menu: ↑, ↓, B, ↓, ↓, ↑+B, B. This requires frame-perfect input to succeed; if the game is being played on an emulator, the password entry can also be accessed by changing RAM address $DFDE to 0x06 and pressing B. Alternatively, the Game Genie code 06F-DE2-F7E can be used, which removes the requirement for frame-perfect button entry and reduces the button sequence to ↑, ↓, B, ↓, ↓, B. 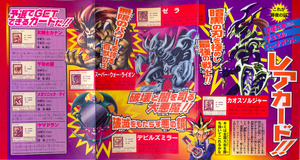 Eight of the fifteen secret cards were awarded at the Duel Monsters National Tournament in February 1999. Physical copies of the top four cards were also awarded.

The Extra Deck does not exist in this game. Instead, Fusion Summons are performed during Duels by trying to Summon a monster from the hand on top of a monster on the field. The game features 2,159 fusions, resulting in 52 different monsters; often the same monster can be Summoned using a variety of Fusion Material, though eight of the monsters have only a single possible fusion.

All but one of the fusions in Duel Monsters use only monsters as material. The exception is #063: "Harpie Lady Sister", which is fused by equipping #062: "Harpie Lady" with #318: "Elegant Egotist". In the ROM, this fusion is handled as an effect, and is not stored with the monster-only fusions.

While the player does not receive a permanent copy of a monster Summoned by fusion, if a fused monster was not previously encountered, an entry for it is added.

#278 "Petit Moth" and its stages evolve into other cards after being on the field for one turn, in the order shown below. Permanent copies of the evolutions are not added to the player's trunk, though if the player has not previously encountered one of the evolutions, an entry for it is added, similar to fused monsters.

Only one copy of "Petit Moth" can be acquired per game, by defeating Weevil Underwood one hundred times (it can also be traded back from later games). Permanent copies of its evolutions can only be acquired by Communication Fusion.

Having only 300 ATK and 200 DEF, and with AI opponents attacking when they have a stronger monster, it is usually difficult to keep "Petit Moth" on the field for a turn; there are only thirteen monsters in the game with a base ATK of 300 or less. "Petit Moth" can be protected in a few different ways:

The game's code allows certain Equip Cards to be used on "Petit Moth". However, since only a single card can be played per turn, and because "Petit Moth" is evolved into "Larvae Moth" as soon as its controller's next turn starts, it is not actually possible to equip any cards to "Petit Moth" before it evolves.

Yu-Gi-Oh! Duel Monsters predates the Yu-Gi-Oh! Official Card Game and features its own rules for Duel Monsters, most of which are based on the manga rules.

Earlier version of the main menu

An earlier version of the game featured a different graphic for the main menu. It did not include the copyright text, had a different font for the text Duel Monsters (デュエルモンスターズ), a different picture of Yami Yugi, and different text for the menu options:[4]

The cards in this promotional set were from Konami's collector's cards, a series that predated the Yu-Gi-Oh! Official Card Game.

Another collector's card, "Seiyaryu", was given out at meeting experience for this game. Five copies of that card were also used as prizes in an Akamaru Jump raffle.

The following scenes from the manga were used to create graphics for this game.