"On My Own", known as "Win With My Own Hands!!" in the Japanese version, is the seventy-seventh chapter of the Yu-Gi-Oh! manga. In its first English printing, it was numbered as the eighteenth chapter of Yu-Gi-Oh! Duelist. In the 3-in-1 edition, its number was changed to match the original Japanese printing.

Nine hours after the beginning of Duelist Kingdom, twenty nine participants remain. Dark Yugi, Anzu, Jonouchi, Honda and Bakura search around for Mokuba to no avail. They conclude that he must have been taken to Pegasus Castle, so right now they should focus on earning their Star Chips to gain entry. Dark Yugi has six, while Jonouchi still only has two, while they each need ten. 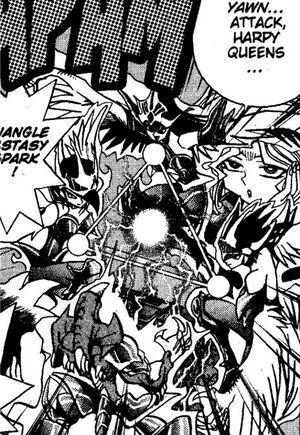 Elsewhere, Mai has her "Harpy Lady" monsters accessorized and refers to them as "Harpy Queens". They use their "Triangle Ecstasy Spark" attack to defeat an unnamed monster. Mai yawns as she effortlessly wins the Duel. She tells her opponent to hand over his Star Chips and beat it. He complies and sobs that he is now out of the tournament. Mai sighs at how boring it was and thinks she just can't get into it.

Mai lies down on the green and looks at the sun starting to set over the ocean. She reflects on Jonouchi saying "There's one thing that doesn't change... it's what you can show... but you can't see!". She sits up, annoyed that she lost to someone like him and is irritated that she cannot figure out what the riddle means. She mutters to herself and thinks about some answers; "a bald guy wearing a toupee" and "a skinny girl with a 'D' cup".

Just then, Mai is interrupted by Dinosaur Ryuzaki. Still mad at her for making a fool of him in their Duel on the ship, he challenges her to rematch. However Mai has no interest in facing someone she has already beaten and tells him to get lost. Ryuzaki reminds her that he was the runner-up in the Japanese nationals and says that he has five Star Chips, so he is confident that he will win this one. However Mai raises her Duel Glove and Ryuzaki is shocked to see that she has eight Star Chips. Mai says that she just needs two more, but tells Ryuzaki not to worry, as she has already decided who she will win her last two from and he is not a loser like Ryuzaki. Ryuzaki wonders if she means Yugi, whom he had planned on beating himself. But Mai thinks that before she does that, there's someone else that she needs to take-down and pictures Jonouchi.

Mai gets an idea and tells Ryuzaki that she will Duel him after all, but under the condition that he beats someone for her first. Ryuzaki hates having to do anything for her, but since it is what it takes, he agrees. He asks who the opponent is to be and Mai starts to lead Ryuzaki to him. She then adds one more thing; until Ryuzaki beats this person, he is to be considered her slave. Ryuzaki is not happy with that.

Mai asks Ryuzaki if he knows the answer to the "something that you can show, but can't see" riddle. Ryuzaki pauses at first and asks if this is a quiz. He then thinks he has the answer; the octopus in a piece of takoyaki. Mai then thinks it was stupid of her to ask.

Elsewhere, Jonouchi has just challenged someone to a Duel. However, the would-be opponent is intimidated by Dark Yugi's presence and declines in fear of the possibility of facing Dark Yugi next. Honda points out that he was the fourth person to do that and Dark Yugi calls them cowards. Anzu is astonished by how everyone is running away and thinks to herself that it does feel kind of good having everyone afraid of Dark Yugi. Bakura thinks they're going to have a problem getting opponents for Jonouchi and Honda fears that Jonouchi will easily lose if they leave him find an opponent by himself. As Jonouchi starts to tell Honda off, he hears a familiar laugh and turns to see Mai.

Mai greets Jonouchi and teases him and his friends for being "glued at the hip" and asks if they were ducklings in a past life. She asks Dark Yugi to be honest and tell her if it is a burden having those people tailing after him. She bets that if he was alone, he would be at Pegasus Castle by now. However she notices Dark Yugi is getting mad and eases off provoking him as she doesn't want to fight him just yet, as her current target is Jonouchi.

Mai claims that she let Jonouchi defeat her last time and says that he must now face her slave as she introduces Ryuzaki. Dark Yugi recalls Ryuzaki's skill level from the Japanese nationals, in which Ryuzaki was the runner-up, and wonders if Jonouchi can win. Jonouchi accepts the challenge. Ryuzaki thinks Jonouchi is a sucker and that maybe he should thank Mai for arranging the Duel. Honda tries convincing Jonouchi to think about this first, but Jonouchi is determined to prove that he is not a "duckling". Mai smiles, thinking Jonouchi is a simple guy. She would like to play him again and win back her Star Chips, but thinks that would be immature. However if Ryuzaki wins and she beats Ryuzaki, she sees that as herself beating both of them. Anzu fumes over Mai constantly targeting Jonouchi and thinks that Mai is obviously afraid of losing to Dark Yugi. She feels at ease again after thinking that Dark Yugi will lead Jonouchi to victory again. 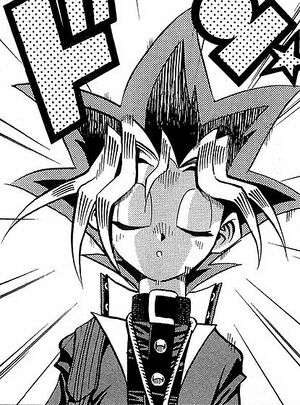 Ryuzaki points to a Battle Box, asks if Jonouchi is okay with it and says that he will be waiting for him there. Before going to the box himself, Jonouchi asks Dark Yugi for a favor; he asks that Dark Yugi not give him any advice during this Duel. Bakura, Anzu and Honda are shocked and remind Jonouchi that Ryuzaki has a much higher skill level than him. Jonouchi admits that a part of him knows this is a bad idea. He knows that if he bets and loses all his Star Chips on this Duel, he won't be able to save Shizuka. However, he wants to be able to win on his own and believes that if he wins, Shizuka can win too. Dark Yugi is proud of Jonouchi. He urges Jonouchi to win on his own and switches back to Yugi. Yugi's friends are a bit surprised to see Yugi back to normal. Anzu suspects that Dark Yugi accepted Yugi's wishes and hid himself away in Yugi's heart as proof of his trust. By trusting in his friend and staying out of the fight, he is helping Jonouchi be more confident, she thinks. However, just before entering the Battle Box, Jonouchi does start to feel more worried without Dark Yugi around.

Calling him her slave, Mai urges Ryuzaki to win and informs him that there will be a prize for him if he does. Jonouchi and Ryuzaki agree to wage 2 Star Chips. The field consists of mostly Wasteland on Ryuzaki's side and Grassland on Jonuochi's. Jonouchi thinks to himself that Ryuzaki's Deck is probably strong having come second nationals, but has faith in his own "Baby Dragon" and "Time Wizard" combo. 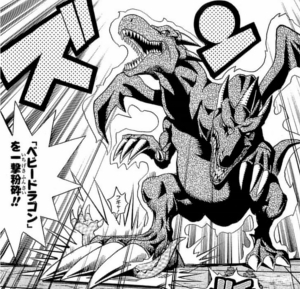 Jonouchi goes first and pleased to find his opening hand contains both "Baby Dragon" and "Time Wizard". Believing his victory is already guaranteed, he confidently plays "Baby Dragon" in Defense Mode and thinks it does not matter what monster Ryuzaki plays, as he will just use "Time Wizard" on his next turn. However Ryuzaki Summons "Two-Headed King Rex" and has it attack "Baby Dragon" stomping on it, squashing it. Ryuzaki laughs and asks if Jonouchi knows anything about the game. He explains that Jonouchi cannot just play a card and expect his opponent to let him use a combo.

Yugi starts to worry about Jonouchi and Mai laughs that the outcome of the Duel is already decided.

In the anime, the beginning of the eleventh episode, "The Dueling Monkey" is based on this chapter. A number of changes are made, including: