"Lying Eyes" is the second chapter of the Yu-Gi-Oh! manga.

Jonouchi is now friends with Yugi. The two of them get excited when they see a ZTV van outside their school. While they hope that means there is a star present, the studio turns out to be doing a documentary about bullying.

Yugi talks to Jonouchi about a pornographic video, Video Girl, Jonouchi watched the previous night. Yugi begins to celebrate after Jonouchi offers to lend it to Yugi. The two of them notice a ZTV van outside the school. They begin to think someone famous might go to their school. Yugi tries looking through the van window, but is unable to see as it is a one-sided mirror. As he does this, the ZTV director inside spots him and announces that Yugi is to be the star of their next project.

After filming the intro to the documentary about bullying, the director calls on A.D. Fujita, who comes over and is handed a picture of Yugi. The director explains that they need a video footage of Yugi getting bullied. He gives Fujita his chance to be on camera telling him that he's going to play the part of the bully.

Back in the classroom, Jonouchi tells Anzu Mazaki that there is a star attending their school. In the Japanese version, Jonouchi says that the star is probably disguised as a student and he is going to unmask them. He laughs that they will make a lot of money with a photo of them. He and Anzu then argue over whether that's a crime or not. In the English version, Anzu argues that there isn't a star, due to lack of evidence.

After Yugi and Jonouchi leave the classroom, Yugi becomes unsure about there being a star at their school, causing Jonouchi to leave in search of the star himself. Fujita in disguise as a student overhears their conversation. He introduces himself to Yugi and tells him, he knows who the star is and offers to introduce her to Yugi. He instructs Yugi to come alone behind the gym during recess.

At recess Yugi arrives at the location, while cameramen hide in some nearby bushes. Fujita begins to beat-up Yugi until Jonouchi arrives to save Yugi. He grabs Fujita by the collar and threatens him. Fujita replies that he didn't want to, but the director...

The director intervenes and tells Fujita he can leave. He explains that Yugi is now the star of the show, he will get dozens of letters from people sympathizing with him. Jonouchi tries to attack the director but ends up getting beaten up himself. 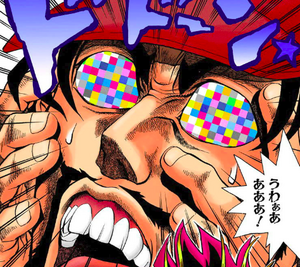 Dark Yugi meets up with the director later at the car park of the ZTV building. He accuses the director of "trespassing in his soul" and imposes a Shadow Game, the dice game. He takes out a die. Whoever rolls the lowest wins. In case of a tie, the TV director would win. The director sees no reason to play, but after Yugi rolled a 6, the director laughs, saying he's won no matter what, so he doesn't need to roll. Yugi insists, and the director angrily throws the die at Yugi's head. The die cracks off Yugi's head and "1" shows up. The TV director says he won, but Yugi says he didn't. It turns out that the die broke in half: the 6 also showed on top, meaning that the director rolled a 7 and lost. Yugi inflicts the Penalty Game, "Mosaic Illusion". The director begins to see everything in mosaic (like the pixelation used to cover people's faces on TV) because he bent the truth on camera.