"Monster Fight!! (Part 1)" is the forty-third chapter of the Yu-Gi-Oh! manga.

Yugi Mutou takes-up playing the game Monster Fighter, which quickly becomes popular at school. Yugi is soon challenged to a game by Koji Nagumo, who has a reputation for stealing.

At Kame Game, Sugoroku Mutou hands Katsuya Jonouchi a gun-shaped toy, saying here is a game he might like, Monster Fighter. Yugi explains that it is like a combination of a monster boxing game and arm wrestling. Jonouchi says that it sounds neat and Yugi agrees, thinking that it is going to be "hot". 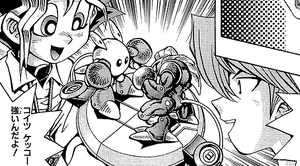 Yugi goes on to explain how to setup the game; first the player picks a monster that they are going to use. There are over a hundred kinds of monsters; Each with their own moves and hit strength. Jonouchi chooses a monster, "Killer Emaada". Yugi continues to explain the rules; Once the monster has been chosen, the player places it on the special "Fighting Gun". The monster is connected to the base with a remote control wire. Then the two players link their guns to battle. Yugi has chosen the monster, "Alti", who he claims is very strong. Before they can begin, they must input their move data. This is done by inserting a small barcode disk into a sensor on the back of the gun. The sensor scans the disk and reads its secret moves. Each monster has different finishing moves, Yugi adds.

Yugi explains how to battle; Once the game begins players are to watch their opponent for an opening and use the punch, kick and guard buttons to defeat him. A diagram shows where the punch, kick, guard and finishing move buttons are on the gun. There are two ways to win; Knock the enemy out by hitting their weak points or force them out of the arena with a critical hit. 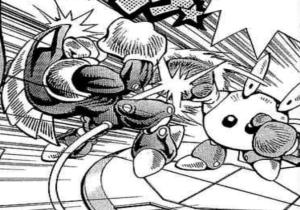 "Alti" knocks "Killer Emaada" out of the ring.

Yugi and Jonouchi decide to battle with their monsters. After much punching, blocking and kicking, Jonouchi leaves "Killer Emaada's" weak point open and Yugi has "Alti" kick it. The hit causes the handle of Jonouchi's gun to vibrate. Sugoroku explains that when a player's weak point is hit, they cannot move for two seconds and he prompts Yugi to take this opportunity to use his finishing move. Yugi pulls the trigger on his gun and "Alti" uses its "Mach Tornado Punch" attack, knocking "Killer Emaada" off the platform. Yugi celebrates and Jonouchi asks if he ever loses at anything.

Sugoroku asks for Jonouchi's opinion on the give. Jonouchi replies that it is awesome and he loves it. Jonouchi then suggests that he and Yugi show it to everyone at school.

The next day at school, during a break, Yugi faces Jonouchi in another game of Monster Fighter. Yugi's "Alti" gets a critical hit on Jonouchi's "Killer Emmada", knocking it out of the arena. A group of students flock around them and ask what game this is and decide that they want one too.

Within one week, Monster Fighter became a big hit at school. During lunch break and recess battles were being held everywhere.

At school, Jonouchi admits that he did not think Monster Fighter would be this popular. Yugi says that they are still sold out at his store and it is like that everywhere else too. Although Sugoroku was happy because it meant the store got a lot of money, Yugi feels it is almost like it was too big a hit. Some students comes over and ask Yugi if his place is still sold out. He replies that they are and he does not know when they will be getting some more. After they leave, Yugi tells Jonouchi that that is the hundredth time he has been asked today.

A boy with blonde hair and a black sleeveless top, featuring a spider design arrives at classroom 1-B and asks if there is a "dude called Yugi" in this class. Someone points Yugi to the visitor, but warns him that that is Koji "the Spider" Nagumo, someone who is good at games, but is said to steal people's things.

Yugi goes up to the roof with Koji. Yugi says that if this is about Monster Fighter, his store is still sold out. Koji says that he is aware and does not go to the store. He holds up a Fighting Gun and Yugi realizes that he already has one. Koji explains that he brought Yugi up here because he knew Yugi would have a Monster Fighter and asks if he brought it with him. Yugi holds his up and slowly says "yes". Koji suggests they have a battle. He claims to be a gamer like Yugi and the one who made Monster Fighter popular. Yugi happily agrees, seeing that Koji was just looking for someone to play with.

Yugi uses "Alti" again for their game. Koji calls it a nice scapegoat for a weakling. Koji's monster is his "Wild Spider", who he claims is undefeated. 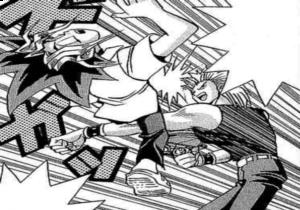 The battle starts and Koji is slightly impressed by Yugi's moves. Koji then points out that he forgot to mention there is one house rule that he always plays by; The winner takes the loser's fighting gun and their monster. Yugi is horrified and refuses. Koji tells Yugi to watch out as he is wide open. Yugi stares at the monsters and wonders what he means. Koji calls him a fool and throws a real punch outside the game at Yugi, reminding him that he said he was wide open. Yugi falls to the ground.

Koji hangs onto Yugi's equipment, saying he will keep it in accordance to the rules. Yugi painfully tries to get up and Koji says that he has to run as he has other appointments and laughs that he will get serious next time they fight.

Back in the classroom, Honda is telling Jonouchi about Monster Fighter hunters; A lot of people at their school have fallen victim to them and the hunters are selling the games on the black market. Jonouchi angrily asks what jerk would do this. Yugi walks into the room and the two them quickly realize that Yugi has had his Monster Fighter stolen. Yugi says to Jonouchi that he would like to ask a favor.

Outside the gym, Koji is selling Monster Fighters at ¥30,000 (about $300 US at the time). Among the monsters for sale is Yugi's "Alti", a goblin, a skull and a reptile. Koji boasts that he has a good stock and if he runs out, he will just steal some some more. He calls himself a good entrepreneur. He hears a door opening and suspects it is a customer. However he turns to see Yugi, who has since changed to Dark Yugi.

Dark Yugi says that he has another one and challenges Koji to try and steal it from him. Dark Yugi is now holding Jonouchi's gun and monster, "Killer Emaada". Koji recognizes Yugi from earlier, but is unaware of the transformation. Dark Yugi says that it is a rematch. Koji did not think that Yugi would find him and asks "You think you're pretty smart?". In the English version, he adds that Yugi must have a brain under all that hair. Dark Yugi explains that the game will play best out three and the game will be a Shadow Game. Koji suspects that this means there will be no rules and plans to knock Dark Yugi out again. 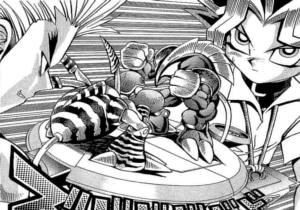 The game starts and the two monsters battle for a while. Koji thinks Dark Yugi is a fool for playing seriously. After a few more moves, Koji raises his hand, ready to punch Dark Yugi. However, this causes him to stop concentrating on the game, leaving his monster, "Wild Spider", right open. Dark Yugi takes the chance and "Killer Emaada" scores a critical hit on "Wild Spider", hitting it in the jaw and knocking it out of the arena. Koji feels the force of the punch on his own jaw and is knocked back. 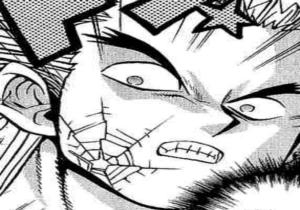 The crack on Koji's face

Koji rolls on the floor in pain. Dark Yugi explains that in this game, their monsters will not be damaged, as the players act as their scapegoats. Koji now realizes there is a crack in his face in the spot where his monster got hit. Dark Yugi asks if Koji now understands that if they do not play seriously, their bodies will be broken instead of their monsters.

Dark Yugi has won the first round and reminds Koji that is "Monster Fighter... the Shadow Game".